By HRAYR ATTARIAN
December 5, 2013
Sign in to view read count 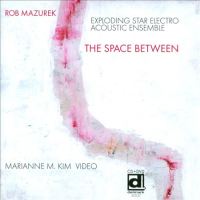 Musical adventurer Rob Mazurek's The Space Between is a provocative and heady fusion of sight and sound. The double disc set includes an audio CD and a DVD containing performance and multimedia artist Marianne M. Kim's haunting, abstract video accompaniment to the music.

The forty-minute suite is divided conveniently, and perhaps whimsically, into eight segments of 5 minutes each. The tracks however flow into each other with no physical or conceptual breaks. The sonic backdrop is synth heavy and the ambiance shifts from otherworldly and expansive to intensely thunderous. Even when not watching the intriguing visual sequences the music itself conjures up various mental images. Mazurek's mellow but passionate cornet and flutist Nicole Mitchell's thick breathy tones mark "Illumination Drone 17" which is the musical equivalent of a psychedelic celestial light show.

Mitchell brings an organic element to the darkly metallic "We Are All One With The Moon And Planets." The atmosphere has the semblance of the inside of a sterile spaceship. Mazurek's warm, meandering solo sets the mood for the mystical poetry that vocalist Damon Locks pensively and powerfully enunciates. Mitchell's resonant lines and pianist Jeff Kowalkowski chiming chords underscore the spoken words. Voice and acoustic instruments melt away "the walls" and as computerized sonances sparkle in the background Mitchell's playful, dancing phrases fades in the churning electronic din of "Only."

To those who know Mazurek's work it comes as no surprise that The Space Between is a unique and stimulating work. Despite its overtly unorthodox creativity the record remains oddly accessible and delights the curious minded novice as well as the open eared veteran listener.

Vortex, Pts. 1-5; We Are All One With The Moon And Planets; The Shifting Sequence; Illumination Drone 17; Space Between; Seven Blues; Indra’s Net.