The Sound of Jazz 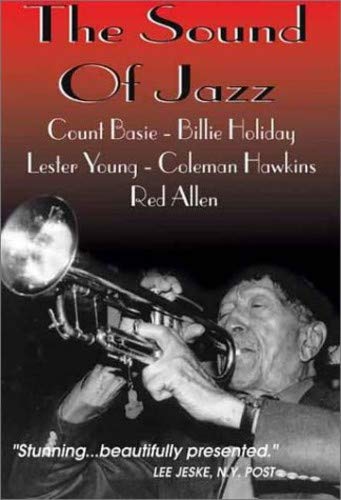 Oddly omitting Thelonious Monk, this DVD presentation of CBS Television's The Sound of Jazz still rates near the top of jazz on the small screen, albeit in a somewhat diminished capacity, lagging behind the earlier VHS release. But for most jazz fans, any edition of The Sound of Jazz still boasts, regardless of drawbacks, the ultimate televised gathering of many of the music's key artists. Particularly evident with this transfer is how the studio lights wreak havoc with the reflections in the brass instruments, especially near the beginning of the program, emitting strange black bands that refract and compromise the image, a problem picked up less clearly in the VHS version. Fifties television photography was always a bit perplexing, in that the technology and videotaping technique plays a strange compositional trick, allowing us to look deep into the frame and see, for instance, what movements background figures are making, amounting to a kind of soft, deep focus—everything is blurred, but we do have depth of field. As raggedy as this looks, especially by today's standards, like in the CBS Orson Welles production of King Lear or any Honeymooners episode, with The Sound of Jazz we are able to focus our attention wherever that attention is in a moment directed. One may gaze on Jo Jones keeping time, or instead Count Basie and his punctuating piano style and determine that both are equally essential to the Basie band's core rhythm and swing. The well known highlight of the program was the final teaming of Billie Holiday and Lester Young. Holiday's face, in profile, with her chin turned towards her left shoulder, occupies eighty percent of the frame for the bulk of "Fine and Mellow," and when we contrast her singing voice with her speaking voice—which is heard via voice-over—the vocal performance is a wonder, a delight rating just behind the nod and look of utter approbation she gives Young at the conclusion of his breathy, warm solo. And then there is Jimmy Rushing, in fine form, singing with commanding intonation, but an absolute bear of a man, with pronounced folds of skin at the base of his shoulder blades bulging beneath his sport coat, and from the front resembling, rather alarmingly, a post-Hall of Fame Kirby Puckett. This DVD, which is bereft of notes, a booklet, or anything of the like, at least left the program's commercials in tact, and if you did miss Noël Coward on that week's Ed Sullivan Show , you are probably better off with his memoirs besides.