Steve Coleman and Five Elements: The Sonic Language of Myth 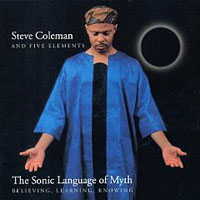 The '90s have kept alto saxophonist Steve Coleman busy. Among his many projects, the Five Elements group represents some of his most coherent music. As opposed to groups like the Mystic Rhythm Society, his Five Elements group has always maintained a funkier edge and a deeper groove.

The idea of the material on The Sonic Language of Myth, as Coleman articulates it, relates to symbolic representation of experience and such abstract concepts as resistance, renewal, and resurrection. As this connects with the average listener, all the mumbo-jumbo may not be immediately apparent—but the lay observer will certainly note that Five Elements pack together a steaming groove with sensual explorations of rhythm and melody. This time around, Coleman makes use of a larger group of musicians to achieve orchestral sonorities and broader textures (special credit goes to composer Henry Threadgill for a lot of the large-group compositions). Proportionately less time on this record is devoted to groove-oriented material.

Coleman's greatest contributions to jazz derive from his longstanding interest in African and other world percussion systems. His compositions flow freely from one odd time signature to another, giving the impression of constant flux. Textural units, created both by Coleman during composition and by the musicians during improvisation, act as floating islands in this polyrhythmic sea. Meanwhile, Coleman's articulate and mature voice on the horn can be traced back to his early work with Dave Holland, Cecil Taylor, and Sam Rivers. Even though funk obviously informs most of what Five Elements do, this music remains some of the most intellectually rigorous in jazz.

After recent forays into vocalization (mostly involving hard-edged rappers), Coleman seems to have retreated back into instrumental performance on The Sonic Language of Myth. When voice does appear, it mostly serves an instrumental role. To these ears, this change offers welcome relief from the failed experimentation of records like '95's Curves of Life. But then again, experimentation has always been at the core of the Steve Coleman experience, and some of his amazing ideas have challenged and transformed modern jazz. The Sonic Language of Myth represents only the latest in an ongoing series of documents. To Coleman's credit, his recordings keep getting better and better.