By BARRY O'SULLIVAN
March 8, 2008
Sign in to view read count 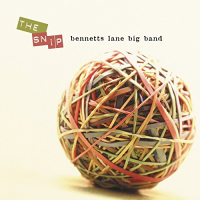 This big band emerged in 2002 when eleven of Australia's finest jazz musicians came together as the Bennett's Lane Big Band. It was conceived as a vehicle for the performance of new works traversing the fields of improvised and composed music. Since its inception the band has played at the Melbourne International Jazz Festival and The Wangaratta Jazz Festival in addition to maintaining it's residency at Bennett's Lane Jazz Club, Melbourne's premier jazz joint, on the first Monday of every month.

The recording was made shortly after the band's formation and the performances captured here reflects the intensity, excitement and urgency inherent in new projects. Recently released The Snip (ABC Jazz, 2008) consists of nine original tracks shifting between mellow tunes to freewheeling, eclectic extravaganzas all of which are imbued with an overwhelming joy of playing and recording together.

The opener, "Blues for Lambie," written by Adrian Sherriff is a dedication to the drummer Scott Lambie with inspiration from Thelonius Monk and features fine trumpet playing from both Eugene Ball and Damien Maughan. Other outstanding tracks include Eugene Ball's "The Spherical Suite" a fifteen minute masterpiece featuring Andrea Keller on piano and "Boy in a-hus" with Jamie Oehler's mournful tenor sax being a highlight. The title track "The Snip," written by the bassist Nick Heywood, is based on the idea of having each section of the band play repetitive phrases using them as a launching pad for improvisation. This may work for the creativity of the musicians but to the uninitiated it can sometimes appear just too challenging. It is the least successful composition in the compilation but it does have its highlights. Jordan Murray's "Requiem for a Parking Attendant," featuring the composer on trombone ,draws its title from an altercation the composer had with one of Melbourne's grey ghosts of the parking meters. The composition takes inspiration from Maria Schneider's recording, "Allegresse." The reeds shine in this remarkable sonata of big band emulsion.

The strength of this recording clearly lies in the involvement in the process as a whole —from composition to execution. These are musicians whose passion for artistic synergy is apparent from the very first beat.

Blues for Lambie; Spherical Suite;Boy in a Hus; The Creep; Dreaming the Glorified Bass Player; Foot; Gonk; Requiem for a Parking Attendant; The Snip: