Slumgum / Hugh Ragin: The Sky His Own

By HRAYR ATTARIAN
November 11, 2012
Sign in to view read count 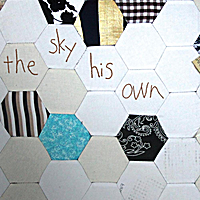 Slumgum exhibits a sophisticated voice and thematic cohesiveness on this, its third release, The Sky His Own. These characteristics are a testament to this innovative Los Angeles-based quartet's camaraderie and shared ideology, as all members of the group, including guest cornetist Hugh Ragin, contribute unique compositions.

Ragin's expansive "Silver Cornet News" starts off hinting at hard bop, with drummer Trevor Anderies energetically driving the melody. Known for the breadth of his ingenuity, Ragin does not disappoint, as his mellowed cornet weaves an imaginative improvisation that flirts with freer sounds. After a brief and advanced duet with saxophonist Jon Armstrong's breathy soprano, the proverbial baton passes to the reedman. Armstrong continues in the same adventurous spirit, but peppers his solo with hints of Sidney Bechet-like trad jazz tones. Pianist Rory Cowal 's rounded and bluesy notes are backed by hot rhythms, as they melt into David Tranchina's tuba-inspired bass and Anderies' almost primal beats.

This trend of borrowing inspiration from various genres is one of the record's themes. Armstrong's somber "Farewell" is, at times, a New Orleans jazz funeral, with long mournful notes of the horns, replete with stately quotes including from the national anthem. In other instances, as Cowal's solemn piano arpeggios roll in front of martial bass and drum rhythms, it is reminiscent of a Western marche funebre.

Not only are the lines between different styles blurred, but the boundaries between composition and improvisation. It is safe to say that delineation between form and freedom is almost completely erased as creative spontaneity and balanced, harmonic structure fuse into a single living entity. Anderies' "Kyo" brims with Zen spirituality. His bells enhance Cowell's hesitant and resonant piano chimes, as silence predominates its opening bars. The somber ambience is further enhanced as Tranchina's sparse and pensive strings echo the occasional, anguished cries of the horns. An angular bass and drum vamp builds up the tempo, and a framework upon which a complex and abstract conversation takes place between the other three. Out of this emerges a distinctly eastern, longing and undulating melody that brings the piece to its satisfying and natural conclusion.

With The Sky His Own Slumgum has recorded their best work to date and not only because of inimitable Hugh Ragin's collaboration but also due to the crystallization and maturity of their own musical vision.