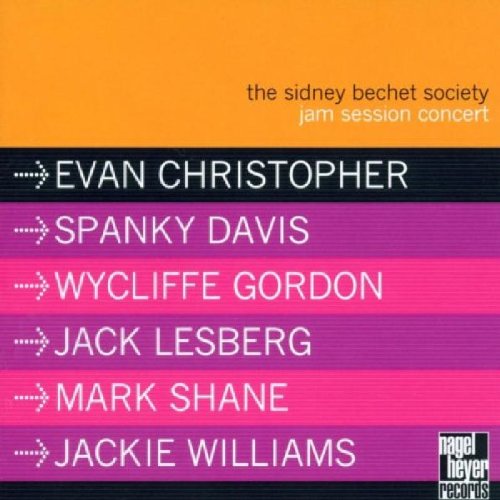 There is not enough of this music recorded.

If Wycliffe Gordon is not the best DAMN trombone player performing in jazz today, I will eat my hat. If you do not believe me, just cue up track four on this new Nagel Heyer trip down memory lane and listen to "Basin Street Blues." Gordon provides a seven-minute clinic on the entire history of the trombone, starting from when it evolved from the medieval sackbut to the evening this disc was recorded. His plunger technique is unsurpassed, making conversation with the ghost of Tricky Sam Nanton in Heaven. And that is just Gordon.

Eric Offner, President of the Sidney Bechet Society assembled a band of young and old for a tribute jam session and invited Hans and Sabine Nagel-Heyer to record the festivities. It seems a bit hard to call this a jam session or a blowing session because the music is so perfectly conceived and performed. It is a great tribute to the talent gathered. In Bechet's place the Evan Christopher, who plays exclusively on clarinet and serves as the music director of the concert. Christopher's playing is exemplary, particularly is low register in the Bechet classic "Petite Fleur." Other super performances include Spanky Davis' muted and open bell workout on Ellington's "Do Nothin' Till You Hear From Me." Mark Shane is quietly superb on Bechet's "Si Tu Vois Ma Mere."

Nagel Heyer Records has produced many recordings with the same premise as this one. When compared with one another, they have all met with some success (though all are truly fine). Among the label's "jam session" recordings, I suspect that this is the best and will make a year end list or two.

Deed I Do; Blues In The Air; Blues In Thirds; Basin Street Blues; Rosetta; Passport To Paradise; Do Nothin' Till You Hear From Me; St. Louis Blues; Bechet Medley; Royal Garden Blues. (Total Time: 50:00).