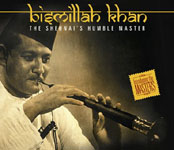 For most people in the West, classical Indian raga music means one instrument, the sitar, and one player, Ravi Shankar. Quite why Shankar came to be considered the greatest modern sitar player over Vilayat Khan and several others, and the sitar as the primary raga instrument over the sarod or the shenai, is debatable. But serendipity probably played a part—when the Beatles' George Harrison started experimenting with Indian music in the mid-1960s, Shankar was the musician he lionized. The West's subsequent embrace of raga has been sufficiently slender to allow for no other musician or instrument.

Like the slightly better-known sarod player Ali Akbar Khan, shenai player Bismillah Khan, who died in 2006 aged ninety, is another raga master deserving of wider international recognition. He was, and remains, a household name in India, where it's hard to find a family with a record player who don't own at least one of his albums. It was Khan's shenai which rang out from the ramparts of Delhi's Red Fort in 1947, as the British flag was lowered and that of newly independent India was raised, and for the next forty years he maintained a prolific performing, broadcasting and recording schedule.

The shenai itself is a people's instrument, the one most commonly played at weddings and in Hindu temples. Khan was the first player to take it into the mainstream of Indian classical music. A double-reed instrument like the oboe, but, in Khan's hands, one with a sweeter, more sonorous tone, its sound evokes John Coltrane's early-1960s work on the soprano saxophone, a resonance reinforced by the modal, raga-like structure of much of Coltrane's music at the time.

The Shenai's Humble Master, part of Saregama's excellent "Introducing The Masters" series, is a double-disc collecting some of Khan's most celebrated recordings from the years 1959-89, several of them on CD for the first time. On most tracks, Khan is accompanied by a tabla player and a shenai chorus, who act something like the resonating strings on a sitar, progressing in harmonic parallel to the lead. Over this background Khan launches into extended improvisations of breathtaking melodic invention. His every solo is a delight, and each one includes at least one passage which is so unexpected and so heart-stoppingly beautiful that it almost literally takes your breath away.

Other tracks find Khan in duet with Vilayat Khan or violinist V.G. Jog, and two others, "Bihag" and "Theme From Kajri," both from 1959, document his early excursions into film soundtracks. All of it has been lovingly re-mastered.