By MARK CORROTO
October 6, 2009
Sign in to view read count 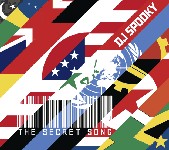 DJ Spooky again proves hip-hop is jazz. Like its grandfather bebop, mixologist/DJ/producer Paul Miller's (aka DJ Spooky) hip-hop is as vibrant and creative as the great revolutionaries in jazz. On The Secret Song he mixes dub, reggae, rock, classical, world, electronic and, well, jazz into a jazz thing.

Spooky's reflections on the financial and world meltdown of the last eight years pulls together a global perspective on the people's culture, be it "Azadi," the Farsi word for "freedom," sung by Iranian vocalist Sussan Deyhim, or the spoken explanation of Adam Smith's Wealth Of Nations by Chinese economist, Jing Zhou. Spooky's album follows a tradition of entertainment as social commentary from Charles Mingus' Mingus Ah Um (Columbia, 1959) to Pink Floyd's The Wall (Capitol, 1979).

Spooky has taken DJ culture out of the nightclubs and into the museums and political arena, creating pieces for Micronesia and the Antarctic. The staggering perspective of this project is quite ambitious. Nonetheless, track-by-track he pulls together a very modern telling of the world's reaction to the ups and downs of our financial markets, or fish markets for that matter.

Spooky orchestrates multiple performers from diverse backgrounds for this project. It isn't until the tenth track, "Heliocentric," that there's a pure piece of jazz speak, with Peter Gordon's flute following the shuffle of Michael Thompson's drums. Later Thompson reappears, but focuses on hip-hop beats, on the drum solo "Composit Refraction" that introduces Matthew Shipp, Michael Bisio, and Khan Jamal's slinky quartet piece, "Pax Per Fidem." Spooky is revealing to us that jazz either overlaps or intersects intercontinentally here. Like his dub reconstruction of Jimmy Page/Led Zeppelin?s classic songs "Dazed and Confused" and "No Quarter" or rapper Mike Ladd's spoken "Known Unknown" made over Thurston Moore's noise guitar that feels like a Brooklyn version of Joao Gilberto's "Waters Of March." Elsewhere, the The Coup raps, as do The Jungle Brothers. There's Indian DJ Abdul Smooth and jazz pianist Vijay Iyer heard, and even "W," George Bush, heard in full sneer. His "No Quartet Dub" featuring the chamber ensemble Golden Hornet Project, could have easily be mistaken for a Pink Floyd track with its headphones-only progressive rock FM feel.

This mix, carefully chosen by Spooky creates a classic "album" statement for our iPod nation of ADD listeners. Some will download only pieces and parts, but ingesting the whole is required for the full effect.

Also included with this disc is a DVD soundtrack created by DJ Spooky for Dziga Vertov's 1924 eighty-eight minute film Kino-Glaz (Cinema Eye). His re-scoring of the film for a performance in St. Petersburg, Russia was subsequently remastered for this DVD release. Like a DJ collage of music, the film cuts, remixes, and freezes images of everyday post-revolutionary life to create Lenin's hip-hop. But we'll leave that discussion to the film critics.