Connie Evingson: The Secret of Christmas

By DAN MCCLENAGHAN
December 2, 2003
Sign in to view read count 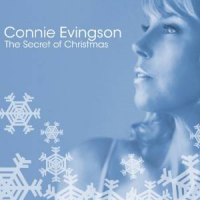 Minneapolis-based vocalist Connie Evingson has a way of turning potential musical yawns into highly original and vibrant jazz workouts. Earlier this year her Let it Be Jazz—Connie Evingson Sings the Beatles gave a jolt of jazzy fresh air to a bunch of Lennon/McCartney tunes from the sixties. Now, with The Secret of Christmas, she does the same for holiday music.

The set is—wisely—composed mostly of lesser-known classics of the genre, with Evingson in full command of her rich and melliflous vocal tone. Included here are Christmas-time staples like "The Christmas Song" (Chestnuts roasting on an open fire...) and an a cappella "Silent Night"; but there's also "Simple Gifts," a traditional Shaker hymn that opens as a ballad, with Evingson backed by Mary Louise Knutson's spare and always tasteful piano accompaniment (Ms. Knutson lent much to the success of Let it Be Jazz... ). Then Ricky Peterson of the Dave Sanborn Band blows in with a cool B3 organ whisper, and a minute later the tempo shifts from the ballad end of the spectrum into a high gear rollicker, with Dave Karr adding the jazz touch on saxophone.

"Gesu Bambino" (the "oh come let us adore him" song) injects a Latin groove into the set, lending an almost mariachi-ish feel when Doc Severinson blows in on trumpet in front of Shai Hayo's ebullient percussion. This sounds like Christmas in Ensenada. Evingson also tackles Tchaikovsky on her "Nutcracker Petite Suite," with the move from one section to the next—"Sugar Plum Fairy," Russian Dance," Arabian Dance"—showcasing the range of her vocal talents.

With The Secret of Christmas Connie Evingson has pulled off the near impossible: she's recorded a musically interesting and highly listenable holiday disc.

Visit Connie Evingson on the web at www.connieevingson.com .

Snowfall/I Love Winter Weather; A Carol of Bells, Simple gifts, The Christmas Song, The Nutcracker Petite Suite, Some Children See Him, Gesu Bambino, The Secret of Christmas, A Cradle in Bethlehem, Silent Night