By MIKE JURKOVIC
December 2, 2018
Sign in to view read count 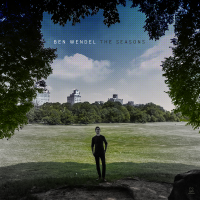 Stepping out as he occasionally does from the genre-mashing ensemble Kneebody, Grammy-nominated saxophonist / bassoonist Ben Wendel takes up the challenge of interpreting the seasons as they exist in this time of climate upheaval and delivers the dynamic, visceral The Seasons.

In 2015, inspired by Tchaikovsky's "The Seasons," Wendel set about writing and performing twelve duets and videos featuring musicians he keenly admires, including Shai Maestro, Joshua Redman, Julian Lage, Matt Brewer, Eric Harland, and vocalist Luciana Souza. With this new imagining, Wendel assembles a pulse-quickening quintet backed by the rhythmic muscle of Brewer and Harland as well as two more of his duet partners, Gilad Hekselman and Aaron Parks. Together, they're gale force.

"January," though it flurries then thunders, is anything but wintry. It's a heated, abrasive exchange of improvisations from Wendel and Hekselman. The post-bop fluency and rock 'n' roll crackle of "February" hits like a slow moving Nor'easter, with Harland a pure dynamo as guitarist and leader whip like high winds around him. Though March is the most deceptive month, Wendel chooses a more nostalgic roll, more lamb than lion, with a sustained lyric solo and bossa nova undertow.

"April" serves as a flirty, pro-creative dance of drums and horn before bursting to fruition as the ensemble, spearheaded here by Brewer and Parks, gets into a frisky jam. Brewer again takes "May" for a winding, wrangling blues/funk run. As we head into the summer months, Wendel's classical touch is evident in the wistful, romantic timbres of both "June" and "July."

In consort with a deep, deep pocket rhythm section, Hekselman kicks up the leaves on "October." Parks comes centerstage on "November" creating a distinctly mid-1970s, Keith Jarrett American Quartet gospel / pop feel as Wendel honks like a latter day Dewey Redman. The ten minute plus "December" closes this exceptional session on a contemplative though building cacophony as an effects driven Hekselman and Wendel's bassoon burn intensely and fade slowly, like a lingering storm that may, or may not subside. Easily one of the 2018's finest recordings.