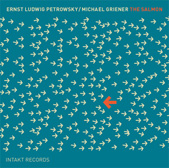 The Salmon is one of those rare instances in which first impressions don't lie. The first run-through of this program revealed highly energized music that nevertheless managed to retain its clarity of both focus and purpose. Subsequent listening has added depth and substance to that impression, and also lent more weight to the overall impression that this just might be one of the Intakt label's best years ever.

Reed player and flautist Ernst-Ludwig Petrowsky has been on the European free scene for decades now, and he brings that wealth of playing experience to bear here. Drummer Michael Griener is a new name to this reviewer, which is a sad reflection only of the reviewer's awareness. He's one of those drummers for whom no detail seems to pass unnoticed. "Salmon No. 2" exemplifies this, not least in the way he shades Petrowsky's minimal alto sax lines, which at moments come on like an amalgam of Anthony Braxton and Lee Konitz; his dry, slightly acidic tone bears the comparison out, but his rhythmic vocabulary is all his own.

He applies that vocabulary most readily on "Salmon No. 7," where his agitated, broken phrasing provokes from Griener not similar agitation, but rather a kind of rolling, perpetually moving rhythmic accompaniment that calls to mind the work of British drummer Tony Oxley.&amp;nbsp; When they reach a more immediate level of coalescence, the music rolls and boils in the same manner as it does elsewhere in this program, but the effect is of music which still retains its clarity of purpose. This is a duo that never falls into the trap of playing for the sake of playing, and that's no small blessing.

The following "Salmon No. 8" calls to mind the line-up of the British group AMM that consisted of drummer Eddie Prevost and tenor saxophonist Lou Gare, in the use of space and near-silence as integral parts of their dialogue. The results are equally compelling, especially when Petrowsky dwells in the upper end of his alto range, holding notes and squeezing out minimal tones even while Griener builds up a momentum.

Even in the midst of that seeming dichotomy, the duo retains its deep empathy and listening ability, offering as potent a statement as any in favor of musicians improvising freely in real time.