The Rolling Stones: Stones in Exile 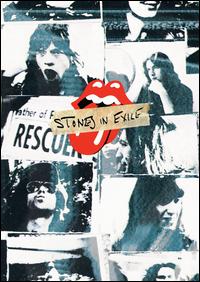 The enduring magic surrounding The Rolling Stones' greatest album, Exile on Main Street (Rolling Stones, 1972) is so seductive even the band itself can't resist trying to explain it. Why else generate multiple packages of audio, video and print two years before the 40th anniversary of the double album's original release?

But lest anyone think Stones in Exile constitutes a documentary of the circumstances surrounding the recording of the album, it is not. This is a remembrance on the part of band members, recording engineers and others in the Stones' party about how they came to live in France for tax purposes in 1971. It is told in a swirl of photos and some rough video footage, while the soundtrack contains spoken dialogue tracing the steps involved in the various processes.

Remastered and archival CDs as well as a book of photos and text can only do so much to elucidate the magnificent spontaneity of this music and the circumstances that led to its creation, which is no doubt why Stones in Exile exists. Containing documentary footage of the band at work in guitarist Keith Richards' French villa, as well as interviews with band members reflecting on the process, it's a valiant attempt to uncover the various sources of inspiration behind the 1972 album.

True to their inherent narcissism, the early section of the DVD finds the Stones and various members of the entourage rather ridiculously trying to paint the group as the ultimate outcasts and rebels because of their decision to move from their native country of England (this was to avoid paying tax on their massive earnings, remember). When the DVD addresses the actual process of recording the album, it becomes more fascinating, as the logistical difficulties that arose around its making are recounted. Bringing in the band's own mobile recording truck was a big advantage, almost wholly counterbalanced by the layout of Richards' Nellcote residence—recording took place in the multi-roomed basement—as well as the scattering of various individuals away from this focal point (drummer Charlie Watts, for instance, chose to live in Richards' abode because the house he had was six hours away by car).

Just as the story descends into the most tawdry details (Richards rationalizing the attractions of heroin use), the scene shifts from the south of France in summer time to Los Angeles, where the grueling task of sorting through takes, overdubbing and mixing took place. Again, there's a sense of the Stones mythologizing themselves in describing what a grind was the process, but at least occasionally there's a sense of wonder emanating from one voice or another about the magic of creativity under pressure.

At this point, it's fairly simple to discern why Exile on Main Street sounds like it does. Originally recorded in a haze of one kind or another, the finishing touches were applied in a decadent atmosphere of another kind. Little wonder not much of anything is clear when listening to this music, because it was anything but clear—perhaps wilfully so, from the Stones' perspective. It was all done on the run, first from the British tax department, then from French authorities, then to meet deadlines for album release prior to touring.

The bonus features included in addition to the hour-long main content are hit and miss. "Extended Interviews" is a misnomer in that each segment consists of title commentary by Richards, Watts and others, much of which isn't related specifically to Exile on Main Street. Anita Pallenberg's observations are the only parts that illuminate at least to some degree the mood of the Stones in France. Seeing Jagger and Watts visit past recording sites is almost but not quite pointless on its own terms, but it's interesting to know that, working in Mick Jagger's Stargroves mansion, equipment setup and placement worked on the same catch-as-catch-can dynamic as at Nellcote.

"Exile Fans" is worth watching and listening to if only to hear producer Don Was, who worked on Exile archiving after spending some years as the Stones' latter day producer, and Liz Phair, whose Exile in Guyville (Matador, 1993) alternately gave homage and satirized its source. In contrast to the glib thoughts of Sheryl Crow, Was and Phair share discerning perceptions of the music based on a deep emotional reactions of their own. Martin Scocese reaches for similarly insightful thoughts, and misses.

The sum effect of Stones in Exile is to render the Stones' masterwork even more of an object of fascination, and it also provides a good bridge to the forthcoming concert film, Ladies and Gentlemen, The Rolling Stones (Eagle, 2010), recorded on the tour that followed the album's release. If the intent was to explicate how it came to be a great work of rock and roll, it fails, but in the process of trying it elevates that object to an even higher level of wonder.

Visit The Rolling Stones on the web.