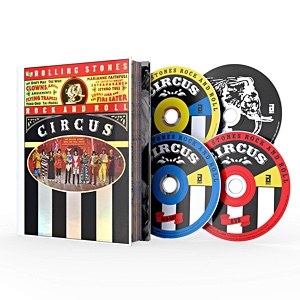 The limited Deluxe Edition of The Rolling Stones Rock and Roll Circus may rescue the film from remaining (arguably) one of the lost artifacts of contemporary rock and roll. Originally set for 2019 release in this format while the iconic band was on the road in North America, a delay due to Mick Jagger's health issues now has the CD/DVD/Blu Ray and digital content in circulation coincidental with announcement of not only the rescheduled tour dates, but also as a 1997 concert film, Bridges To Bremen (Eagle Rock), becomes available in a similar range of configurations.

All of which activity comes over fifty years after the novel project was initially conceived and executed as a BBC television special. Due to the Stones' dissatisfaction with their own performance, it became shrouded in secrecy until the 1996 issuing of the music on CD and the subsequent 2004 release on DVD (some of which features reappear here in a plethora of bonuses). While on some fronts, specifically Rolling Stone Magazine writer David Dalton's effusive essay, Rock and Roll Circus will seem quaint, with the benefit of hindsight, it stands as a precursor to the lavish productions that constituted the group's shows from the Seventies to the present day.

A distinctly hierarchical bill appears before an audience consisting of fan club members, artists between performance and a motley assortment of other onlookers, many of whom had to endure seemingly interminable delays during the course of shooting into the wee hours (see the interview with The Who's Pete Townshend for some especially enlightening insight). Stones' favorite Taj Mahal played as did Jagger's paramour—and pop star in her own right—Marianne Faithfull along with the (at the time) up and coming Jethro Tull. Parlaying their mini-opera "A Quick One While He's Away," the Who might've stolen the show had their performance not come prior to the super group The Dirty Mac (more about whom later).

The presence of the aforementioned American roots musician and his group hearkens not just to the Rolling Stones' early incarnation as a blues band, but also their return to roots as exemplified by the album, Beggars Banquet (London, 1968) for which this film was originally intended to promote. The very recording of that album was reportedly hampered by Rolling Stone Brian Jones' lack of engagement in those proceedings, so it's little surprise (but not much less unnerving) to observe the late musician's detached air during the set by the band he co-founded: perhaps his demeanor is one of the very elements that initially kept the film under wraps. In more practical terms, the multi-instrumentalist's lack of participation necessitated more than a little versatility on the part of Richards, demands for which make his involvement with aforementioned super-group only natural.

Fronted by John Lennon on guitar and vocals and also including guitarist Eric Clapton, fresh off Cream's final concert, the Stones' guitarist on bass(!?) and drummer Mitch Mitchell from the Jimi Hendrix Experience, shortly after the release of Electric Ladyland (Reprise, 1968), previously-unissued rehearsal performances of the quartet, including "Revolution" as well as the formal presentation of "Yer Blues," illuminate how the Beatle's solo career, like those of his bandmates, might well have taken a different and arguably superior turn had he used such material on his early records under his own name. The ad hoc ensemble's short set, aside from some aimless jamming that recalls the defunct power trio 'Slowhand' had recently departed, also foreshadows his sit-ins with Delaney and Bonnie that so fundamentally shaped his future endeavors eponymous and otherwise.

For many viewers and listeners, the technical enhancements offering stellar sound and visuals may be superfluous. Likewise the multiple (and potentially distracting) commentaries available to activate while watching the main concert film. Yet the high-tech remastering in Dolby Vision and Atmos Technologies, in combination with additional, previously-unreleased audio and video content, ultimately serve to enlighten—and not just through the perspective of time: such production is actually in keeping with the creative presentation, were such an extravagant conceit to be mounted today.

The 3D patina of the front cover aside, the beauty of this Deluxe Edition is more than cosmetic. Within the 6" by 7.5" hardcover, the four discs are emblazoned with colorful art and photographs, efficiently ensconced in multi-fold holders, bound in place next to forty-four pages of prose and photos that more than just scratch the surface of the ambiance that was the filming session supervised by filmmaker Michael Lindsay-Hogg (soon to oversee the Let It Be (Apple, 1970) project for the Fab Four early the following year). As a result, The Rolling Stones' Rock and Roll Circus becomes a wholly engrossing experience, one worth repeating multiple times in order to fully utilize and appreciate the panoply of angles it presents on 'the greatest rock and roll band in the world' before the group itself was ready to assume that mantle.