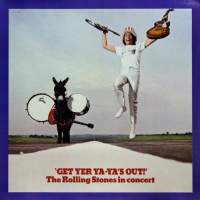 I was born in a crossfire hurricane...

"—Oh Yea—thank yoo kindly—Ah think Ah lost uh Buttin' on mah trowzas— yew don' wan' mah trowzas ta fall down now doo ya."
With this Mick Jagger banty rooster boast, the Rolling Stones flipped off the '60s and the Summer of Love and swaggered confidently into their decadent decade, the 1970s. Get Yer Ya Yas Out! was recorded in late 1969 during an appearance at New York City's Madison Square Garden and stands out in two significant respects when compared to the band's other (authorized) live output. First, the recording stands as the apex of the group's most richly productive period, the fulcrum between the 1960s releases of Beggars Banquet (London, 1968) and Let It Bleed (London, 1969) and the 1970s releases of Sticky Fingers (Rolling Stones, 1971), and Exile on Main Street (Rolling Stones, 1972). Second, it is the finest live recording among all of the Stone's legitimate live pressings.

Two necessary aspects of rock & roll are that of its anger and danger. If the Rolling Stones did not have anger and danger in their music (at least during this period) they would have been the Beatles. In the late '60s and early '70s, the Rolling Stones were the epitome of anger and danger. Drinking, drugs, sex, misogyny, hedonism—this group indulged it all. They served as the period's untethered id to the Beatles' pop- subdued ego. Besides the social contributions, the Rolling Stone's greatest addition to the cultural mix was an amalgam of rock, blues, R & B, soul and country that served as a template for the sounds of bands like the Faces, Humble Pie, and the Black Crowes.

That amalgam is in no better evidence than on this live album. Get Yer Ya Yas Out! has a rollicking, bar band immediacy that is so pungently macho and sexual that even 40 years later the opening of "Jumpin' Jack Flash" will still induce tachycardia. Mick Taylor's slide guitar on "Love in Vain," Mick Jagger's mouth harp on "Midnight Rambler," and Charlie Watts' drumming on "Sympathy for the Devil" established a musical archetype that is earthy and loose. And then there was Keith Richards, a modestly talented guitarist who, like Neil Young, could be identified by his right hand alone and whose mastery of the riff remains astounding.

The sum of all of the parts of the Rolling Stones in 1970 exists as a metaphor of Robert Johnson meeting Friedrich Nietzsche at a Delta crossroads at midnight. They emanated a pagan power and success, Dr. Faustus sans the bargain. The frantic "Street fighting Man" ripples with menace; the intoxicated "Honky Tonk Women" seethes with lechery. The stunning "Midnight Rambler" and the group's answer to Marvell's To His Coy Mistress, "Live with Me," perfectly sum up what the Stones were about in 1970. And while this excitement was captured on any number of unauthorized recordings, it was never to be detected on any subsequent official live recordings. A quick rundown of the legitimate releases might be worthwhile (this does not include authorized bootlegs, of which Brussels Affair (Live 1973) (Promotone, 2011) is better than any of the commercial releases discussed here):

Got Live If You Want It (London, 1966)—Their sound not fully developed, still the excitement the Rolling Stones could stir up was palpable. Their time was yet to come.

Rolling Stones Rock and Roll Circus (Decca. 1968)—the best "You Can't Always Get what You Want ever.

Love You Live (Rolling Stones, 1977)—a ho-hum affair with the exception of those songs on the third side of the 2-LP set recorded in a Canadian club. "Mannish Boy," "Crackin' Up," "Little Red Rooster," and "Around and Around" stand as some of the best live Stones performances ever.

Still Life (Rolling Stones, 1982)—"Under My Thumb" and Twenty Flight Rock" were very cool. The rest are a Disco-hangover throwaway.

Flashpoint (Rolling Stones, 1991)—Supporting the Steel Wheels tour, Flashpoint is interesting for the older songs. "Ruby Tuesday" and "Paint It Black" aged well, but the band sounds in a bit of a hurry, like they just want to get it over with. "Brown Sugar" is too fast, lacking the visceral punch of the slower original.

Stripped (Virgin, 1995)— Certainly the best of the later live recordings for the Sticky Fingers/Exile on Main Street material. "Like a Rolling Stone" is a novelty with Jagger's vocals copied from Hendrix's show- stopping performance at Monterey.

No Security (Virgin, 1998)— Only Interesting for the wicked "Gimme Shelter" and "Sister Morphine."

Some Girls: Love in Texas '78 (Eagle Vision, 2011)—CD/DVD, the band still had something to say on their last great album. The tour yielded this beautifully sloppy and searing Texas concert. "Star, Star."

Live at the Checkerboard Lounge, Chicago 1981 (Eagle Vision, 2011)- -CD/DVD, important for the presence of Muddy Waters on his stompin' ground, singing "Champagne and Reefer.."

Sweet Summer Sun (2013)—The Golden Anniversary concert held at Hyde Park and issued as a CD/DVD set. The Rolling Stones ceased being musicians and became businessmen sometime after Tattoo You (Rolling Stones, 1981) and while there is a bit of this here, the boys are in exceptionally fine form on "Midnight Rambler" with Mick Taylor and a rare performance of "You Got the Silver."

Still, the novice listener's (if there are any) best bet is this humble single release from 1970, with the caveat that Brussels Affair (Live 1973) is also available. The Greatest rock & Roll Band in the World, indeed.

The 40th Anniversary of Get Yer Ya Yas Out was celebrated in 2009 with the release of an expanded anniversary edition that included performance by B.B. King and Ike & Tina Turner as well as previously unreleased (but amply bootlegged Stones). Here, a classic gets remarkably better.