The Rolling Stones by Taschen

By NENAD GEORGIEVSKI
April 11, 2015
Sign in to view read count 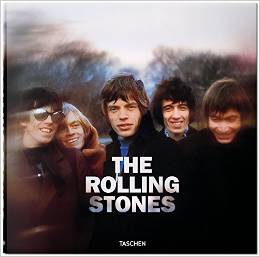 There is an old joke where in case of nuclear war the only ones that will survive the nuclear holocaust would be cockroaches and the Rolling Stones. For more than 50 years since the band began its active career it has created music that has spawned the ages, generations, fashions. The band did not invent rock and roll, but over the years it surely became its very living embodiment. Rock and roll is about instinct, danger, fun, adrenalin, riskiness, emotions, dance and hedonistic enjoyment, and the Rolling Stones certainly has had the lion's share of those things. Its long and illustrious life is anything but uneventful and has contributed largely to people's perception of what rock and roll lifestyle is.

This Taschen curated collection of photographs marks a detailed history of this band which started as blues and R&B aficionados, then moving forward to become Swinging London celebrities, rivals with the Beatles (thus causing irresolvable arguments and debates between their fans that are still ongoing), notorious enemies of the establishment, jet-set tax exiles, various stadium incarnations, the legendary fights between Jagger and Richards, to being the elderly members of the rock aristocracy only to become granddads of rock. The band's history is one of the longest stories in contemporary music and Taschen editor Reuel Golden, in order to assemble this gigantic sized book, had to review one million photographs over a period of two years before he and his crew chose 500 photographs to be put in this book.

This book which is simply titled as The Rolling Stones is the definitive visual and historical record of a remarkable life that the band has had in the last 50 and so years. Delving into various archives it reveals almost every inch of the band's evolution and the lives of its members, past and present. Each of these photographs reveal a person, a band, an emotion that have all contributed to this myth better known as the Rolling Stones. With a foreword written by ex-president Bill Clinton and with contributions by a plethora of photographs, including works by renowned photographers such as Annie Leibovitz, David Bailey, Albert Watson, Ethan Russell, Gered Mankowitz, Anton Corbijn, Helmut Newton, to name but a few, each of these photographs contains an idea of rock and roll and its visual power. More than that, it also contains plenty of previously unseen photographs from the band's vaults. More than that, each photograph features brief explanation from the photographer or the subject of the particular picture which gives info about its context and point in history. All of these photographs depict more than five decades worth of musical events and sensations and chronicle one of the music world's most strangest careers. They weren't supposed to last that long. But the photographers who took these photographs truly captured the feeling and the emotions of the band members at various points in time.

These days we live in the 7th decade of rock and roll, and this music has never felt more irrelevant than ever. These days music charts are inhabited by talentless singers and musicians who look more like a product rather than being an embodiment or expression of the music they perform. Rock and roll has become a footnote and a mere shadow of the powerful force it once used to be. Nowadays, no one can tell whether it is dead, dormant or just dying. Simply put, there aren't any new great new authors, trailblazers, outlaws, storytellers, generation speakers. As best seen on the Crossfire Hurricane documentary about the Stones or best read in Keith Richards' autobiography, the band's career was laden with fabulous music, but also with continuous fights with the powers that be aka going through plenty of stiff opposition and resentment in order to get to the gold. It is true that life is what you make it and the Stones had to fight for it. This book portrays the importance of the band's legacy and speaks volumes about the characters that have created and sustained this music called rock and roll.

More than 50 years and more than 50 albums and countless of bootlegs later, after numerous rumors of band breakups, ups and downs, the Rolling Stones is still the most popular band in the world. It still plays with passion and shows no signs of letting up. After so many years filled with successes it really has nothing left to prove and yet it still continues to roll and tumble because it still loves to do so. This book is another evidence of this claim.