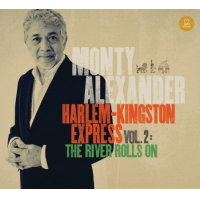 Versatile pianist Monty Alexander has been around long enough, and played through a myriad of styles and ensemble configurations, in a constant quest to get it right. Since his foray back to his Jamaican roots in "Jamento" (1978 Pablo Records) there has been numerous reggae influenced recordings highlighted by his covering the Bob Marley catalog in his 1999 Telarc release "Stir It Up." This struck a nerve with a responding public and rejuvenated his approach and direction, taking it back where he came from. In 2011 Alexander formed his Harlem-Kingston Express on the Motema Music label, and produced a live recording that received rave reviews and wide acclaim. On Harlem-Kingston Express Vol. 2 -The River Rolls On , he takes Caribbean jazz a few fathoms deeper and experiments in taking compositions not vaguely associated with reggae and twisting them into that groove which he aptly calls jamento, stemming from the mento music which oozed out of the Kingston nightclubs in the late 1950's. There have been few artists which have attempted to fuse reggae into jazz, as it demands a specific tempo syncopation which is its most identifiable characteristic. This is exactly the zone where the Harlem-Kingston Express are comfortable and are able to stretch out.

Anchored by drummer Karl Wright, and bassist Courtney Panton, this a hard driving collection of original compositions and weathered remakes which are given a fresh interpretation. The classic Spanish "Concierto de Aranjuez," immortalized in the jazz idiom by Miles Davis in the monumental "Sketches of Spain," is a standout number for its dramatic blending of classical flamenco with a relentless backbeat. Sticking close to home, the Jimmy Cliff opus "The Harder They Come," is a prime example of how and why Alexander is the foremost interpreter of instrumental reggae, done with his trademark flamboyance and flair. Marvin Gaye's "What's Going On," is transformed from revered soul to the islands and back, while maintaining the essence of the song structure. Improvisation as it should be.

The majority of the tracks are originals and cover the gamut from the aggressive opener "Hurricane Come and Gone/Moonlight City," to the laid back vocals as "The River Rolls On," and "Love Notes," which surprisingly feature Alexander as vocalist. "Skamento" has the unmistakable Jamaican calypso feel, where he does some of his best piano work. "Sleaky," is another of those rhythmic gems where it comes down to tight bass and drum work as a vital foundation. This cadenced cohesion is accelerated on the closing "Regulator (Reggae-Later) where Alexander once again demonstrates his formidable piano technique, done while under heavy rhythmic fire.

This record is an not only a tour de force of where Monty Alexander has been, but an affirmation that he has taken his musical influences from ska, mento, reggae, rhythm and blues, ballads, and jazz, and rolled them into a modern synthesis very much in tune with the times, and taking an appreciative audience along for the ride.