By BRUCE LINDSAY
October 13, 2015
Sign in to view read count 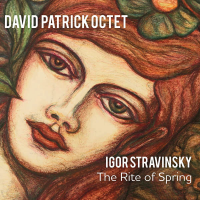 Igor Stravinsky's "The Rite Of Spring," written for the Ballets Russe, premiered in Paris on 29 May 1913. Puccini called it "the creation of a madman": it seems to have held a fascination for jazz musicians ever since it appeared. Scottish pianist David Patrick is the latest jazz musician to create a version—a "re-adaptation" as he puts it—and it's a notable success.

"The Rite Of Spring" was originally written for a seriously large orchestra (although Stravinsky also published a version for four-handed piano). Jazz musicians have down-scaled the instrumental requirement just about as far as it can go: Dylan Howe and Will Butterworth recreated the piece as a piano/drums duo (Stravinsky-The Rite Of Spring, Motorik Records, 2010), The Bad Plus did the same as a trio (The Rite Of Spring, Sony Masterworks, 2014).

Patrick has an octet at his disposal (with Diljeet Bhachu adding some alto flute and piccolo overdubs). That's still a long way short of the 100 or so musicians who performed the Rite's debut, but Patrick's inventive use of the octet—expanded tonally by each horn player's ability on more than one instrument and driven by Ole Seimetz' powerful drumming—ensures that this version has almost as much aural power, and just as much emotional impact, as a full-on orchestral version.

It's important to remember, especially when listening to the beautiful opening melody played by Sam Coombes on soprano, that this is not a happy tale—the maiden selected as the Chosen One will end the ballet by dancing herself to death. Patrick's orchestration constantly remembers that fact, emphasising the dark moods and pessimism of themes such as "Mystical Games Of The Young Maidens" and "Evocation Of The Forefathers." The band's interpretation of "Great Sacred Dance"—powerful, edgy, even swinging as it breaks briefly into a Latin groove—is a thrilling climax to the tale that captures its excitement as well as its mystique.

Patrick notes that Stravinsky wasn't happy with the original French and English translations of the Russian titles. He's enlisted the help of Dr Lara Ryazanova-Clarke, head of the University Of Edinburgh's Russian Department, to produce a set of more literal translations—hence these titles differ in some respects from those used in other recordings. The package also benefits from the evocative illustrations by Adrian Wiszniewski (uncle of saxophonist Konrad Wiszniewski).

Neither the visual art or the new translations would matter much if Patrick's re-adaptation didn't work. It does work, retaining the Rite's fin de siècle roots as it adds a 21st century jazz sensibility, bridging with flair and fine musicianship the 100 years since the Rite's debut.

Act I: Adoration Of The Earth. Introduction; Spring Fortune-Telling; Dances Of The Young Maidens; Game Of Abduction; Spring Khorovod; Game Of The Rival Tribes; Procession Of The Sage; The Sage; Dance Of The Earth; Act II: The Great Sacrifice. Introduction; Mystical Games Of The Young Maidens; Wedding Song Of the Chosen One; Evocation Of The Forefathers; Performance Of The Ritual Of The Forefathers; Great Sacred Dance.