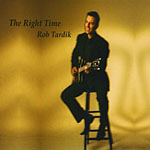 Canadian guitarist Rob Tardik has been around for the past 20 years, during which he has established strong credentials in different fields. Besides being a performer, he is also a teacher and entrepreneur. However, his skill as a guitarist has seen him play with Earl Klugh, Spyro Gyra, Bob James and Lee Ritenour at the Smooth Jazz Awards in Mississauga, Ontario, a city that neighbors Toronto, Canada. Mississauga honored him in 2007 with the "Established Performer of the Year" award, one that was previously given to pianist Oscar Peterson and guitarist Rik Emmett.

Tardik released his self produced debut, Without Words, in 2006, traversing a wide variety of styles that included mainstream and contemporary jazz, pop and Brazilian music—both through standards and originals. He gives himself up entirely to original material on The Right Time and continues to prove that he is no slouch when it comes to writing a tune that grabs.

The beat is on as he sets out "Cruisin'" with his band. Tardik fans the warm breeze of the melody with round, juicy notes over Jeff Salem's emphatic beat. The whole production is neat, with the repeated motifs of the guitar essaying an undeniable charm.

Carson Freeman plays a brawny tenor as he evokes the blues on "That's a Strut." Tardik has his own ideas and he plays them with a lilt, his notes singing a happy song. The juxtaposition of the guitar and the saxophone transcends the ordinary and, with Davor Jordanovsky injecting crystalline piano in consonance with the guitar, the palette gathers a rich hue.

Smooth jazz may be at the core of many of the outings, but the band essays the compositions with a palpable emotion. The group doesn't let the music waft into the atmosphere reeking of blandness; instead, the groove is laid deep, with a creative flair that breathes life into every note. "Flip Flop" glows with a funky beat before swerving into lithe swing, as Tardik plumbs the melody with controlled abandon. Adding to the potency are Jordanovsky's grinding Hammond and the firm linearity of Freeman.

The music is a delight shaped by a band that is what it should be—a collaboration that maps the music in rich detail.