Massimo Discepoli: The Right Place on the Wrong Map

By GENO THACKARA
January 12, 2019
Sign in to view read count 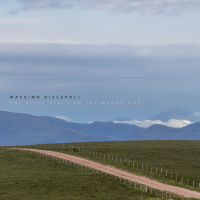 It seems Massimo Discepoli's right place is in territory not just unexpected, but off the usual map entirely. He's based in Italy, though the music doesn't feel rooted in any earthly setting; he's worked primarily as a drummer, but The Right Place on the Wrong Map is a swirling soundworld with the most understated of percussive touches. The affair offers an appealingly hazy daydream for anyone similarly happy to let go of obvious expectations.

Starting with electronic ambience and ticking chimes, Discepoli lets his pieces unwind and float like a balloon on the wind. The atmosphere is spun with radio-wave buzzes and dial-tone noises as much as drums or slow-flowing piano lines. A percussive pulse gradually grows stronger through the middle stretch, though even the semi-regular toms and cymbals stay secondary to more chimes. From soft clouds to static fuzz, the background tones fill in a lot of space without actually becoming prominent either. The second half offers the most extreme poles (or at least the closest to them that this recording gets): "Water Sequences" kicks up the natural rhythms into a kind of half-asleep dance, while "Both Sides of the Line" evokes empty sub-zero tundra with barely a sign of life anywhere.

Discepoli seemingly never wants to settle on one thing too much. There's often something childlike in spots here (maybe it's the chimes), though not exactly calm or innocent. The atmosphere is often chilly without becoming forbidding or off-putting. The drifting is aimless if not formless. There's a consistent mood based on the ever-present mist of synths throughout, but pay attention and there's a wide palette of sounds and tones to pick apart underneath. Still, those small contradictions come out stimulating rather than confusing. This map is an unexpectedly big one with plenty of chances for detours.

Once in a Minute; Thin Border; The Right Place on the Wrong Map; Phase Transition; Water Sequences; Both Sides of the Line; Shapes.