The Revivalists at The Beacon Theater 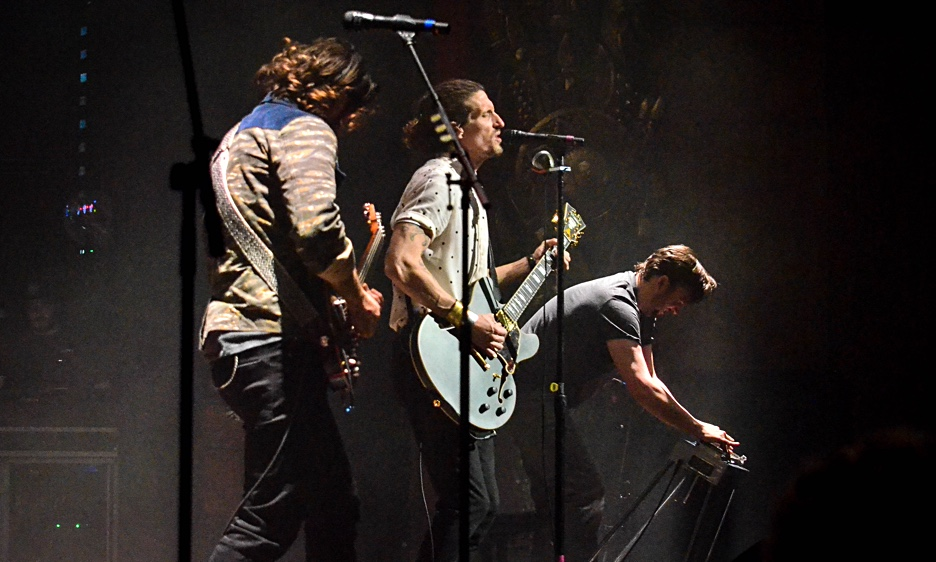 A jamband is defined as a musical group whose live albums and concerts relate to a fan culture that began in the '60s with the Grateful Dead, and continued with bands such as the Allman Brothers Band and the like. These bands often perform lengthy jams at its concerts. Roots rock is rock music that looks back to rock's origins in folk, blues and country. Roots rock is most often used in a broad sense to describe any rock music that incorporates elements of these musical genres. Alternative rock is a style of rock music characterized as unconventional or outside the mainstream.

The Revivalists is a jamband. The group is also considered a roots rock band. The band receives the majority of its airplay on stations that play an alternative format. The Revivalists is an eight-piece band that was formed in New Orleans, LA, in 2007. The group consists of David Shaw (lead vocals and guitar), Zack Feinberg (guitar), Ed Williams (pedal steel guitar and guitar), Rob Ingraham (saxophone), George Gekas (bass), Andrew Campanelli (drums), Michael Girardot (keyboards and trumpet) and Paulet "PJ" Howard (drums and percussion). The band's most recent single, "All My Friends," from the 2018 album, Take Good Care (Loma Vista Recordings), went to No.1 at Adult Alternative radio. "Wish I Knew You" from Men Amongst Mountains (Wind-Up Records, 2016) also reached the top of the Alternative charts.

It was a cool mid-January evening in New York City when the Revivalists touched down at the Beacon Theater for the first of two sold-out concerts. The venue was teeming with a multi-generational crowd that included Millennials, Gen-Xers and Baby Boomers as well as a coterie of music industry executives and hangers-on. On this night, prior to the band's appearance, the fabled theater was abuzz with excitement and anticipation.

The high-octane performance provided the audience with exactly the show that they had hoped to see. Shaw's voice was spot-on. His showmanship and soulful singing had all eyes in the crowd glued to his every move. Highlights included: the opening tune "It Was a Sin" (which began with a guitar solo while the rest of the members found their way to the stage), "Oh No," "You And I," "Monster," "Criminal" (the song that put the band on the map), the swampy blues number "Fade Away," "Got Love," and the main set-ending tune "Celebration."

With the audience on its feet and wanting more, Shaw and his bandmates returned for a three-song encore jam. The lengthy jam was a tour de force that incorporated "Otherside of Paradise," "You Said It All" and "Wish I Knew You." Not only were the audience members on their feet, many were seen dancing in the aisles. Other frenzied fans were observed bopping to the beat as they rushed toward the stage—only to be stopped by the venue's security staff. As the jam came to an end, the band took its bows. Some of the crowd members headed toward the doors, but most of the audience members refused to move. Those who remained were rewarded with a rousing cover of the Allman Brothers Band's "Whipping Post."