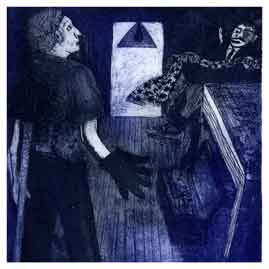 This five disc set is limited to 200 copies, which automatically gives it the distinction of being collectable. Although each disc is obviously the work of a set aggregation, there's sufficient depth and diversity in the ground covered for each to warrant separate discussion.

The Remote Viewers reside on that sparsely populated ground where systems music meets free improvisation and those two fields in turn meet with art song and electronica. The first and last of these come together on the single piece entitled "October Rush" on the first disc. Momentum and stasis meet in a place where the electronics of Glen Gupta and Dave Tucker are at one time mapping the territory of mutant dance and at another lending a minimal pulse to the proceedings. John Edwards on bass frequently fills the music's open acreage, and what might on paper seem like an unlikely collusion is realized with aplomb.

The music on the second disc is a reworking of material found on disc three and in its way is emblematic of an understandable reluctance to abandon ideas before they've outlived their use. Here the mood is darker, with the electronica hinting at some nightmare scenario even while the saxophones breathe anxious life into a body of music that would otherwise be unremittingly bleak.

It could be argued that if this body of music is taken as a whole then it's rife with intimations of what's to come. Thus "A Glamor Cast By Idleness," on the third disc, hints at the songs to come on disc four, with a saxophone quartet putting out a mode of unyielding formalism even while it hints at Kurt Weill's take on the art song genre. Electronics serve subversive purposes, however, on "Grinding Stones With Eyes," where in conjunction with Edwards the sonority of the saxophone quartet is subtly but persistently undermined.

The vocals of Louise Petts on disc four provide a welcome human element. What might be her individual take on the torch song genre, aided in no small part by an instrumental setting that's far from suggestive of the notion, sounds like that of a resigned wanderer. Her love of and appreciation for the intrinsic qualities of words manifests itself on "Green Closing," whilst even within the harshness of "Those In Darkness," her ability to provide dramatic tension as well as contrast with the electronica results in some of the best realized music of the entire program. She works the same magic in the midst of the anxiety of "The Slow Sea," where an unremittingly dark melody is pitched in the midst of a musical environment seemingly permissive only of anxiety.

Adrian Northover's program of solo soprano saxophone work on disc five is, however, a hostage to fortune. Evan Parker, Lol Coxhill and Steve Lacy are just the most prominent saxophonists to have worked this seam in the past, and here Northover seems to be closely evoking Parker's spirit within minutes of the program starting. Whilst his work is abundant in its own merits, thhis does amount to something of an indifferent end.