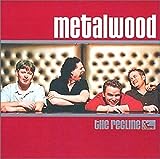 Formed in 1996, this electric jazz quartet Metalwood from Canada is joined by contemporary jazz, fusion and sometimes bop guitarist, John Scofield (on four cuts), for their fifth release and first for Telarc. Working from an agenda of free for all original material by Brad Turner and Chris Tarry, the group presents a listenable balance between a variety of jazz genre, fusion, funk, contemporary and outright swing (!). On cuts like "The Hipster", Turner's upbeat trumpet rides on top of a funky set of keyboards and fretless bass. Matters turn more contemporary and jagged with "New Pants" with guest DJ Logic's scraping turntables. Turner's trumpet recalls Miles Davis' love affair with jazz rock and funky Afro-American funky rhythms. Scofield is listed as present on this track, but it's hard to sort him out from the rest of the blustery goings on. Stretching themselves even further, "U. B. the Monster" leans more toward modern creative jazz with Mike Murley taking up the soprano sax over Morse Code like messages from the keyboards. There's some fine ensemble playing on this track. This 55 minute album will appeal to those who prefer a full and varied smorgasbord of musical recipes. They are all here under the broad heading of jazz rock - - on some cuts more rock than jazz, on others vice versa. Visit this electric, eclectic group's Internet home at www.metalwood.com .