Jennifer Leitham: The Real Me 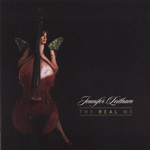 Those who know Jennifer Leitham best will most appreciate the title of The Real Me. Others need know only that she is a terrific bassist—and not a bad singer either.

The album is comprised entirely of Leitham's invariably charming compositions, and much of it is performed by her trio with pianist Josh Nelson and drummer Randy Drake, which has been a working unit for several years. The exceptions are "Keni's Song, a vibrant solo vehicle for Leitham; "Riff Raff, on which her sonorous bass is paired (sans rhythm) with that of guest John Clayton; and "Studio City Stomp, wherein her good friend, trombonist Scott Whitfield, adds finger snaps to hers.

Leitham sings twice, on "Stick It in Your Ear and "Split Brain, and her urbane lyrics and sardonic style remind one of such discerning musical satirists as Dave Frishberg, Mose Allison or Giacomo Gates. She bows the bass sparingly, but to great effect, on "Split Brain and "Turkish Bizarre, and devises a synchronous dialogue with Clayton on the loping "Riff Raff.

The studio date opens with "C.O.D., which, she writes, was "written in anger but doesn't sound like it. Its cheerful melody is neatly introduced by Nelson, whose later solo is typically warm and pleasing. "Stomp, another radiant charmer, precedes the atmospheric "Turkish Bizarre and cheeky "Stick It in Your Ear. Next up is Leitham's clever salute to Britain's Fab Four, "Beat the Meatles, followed by "Keni's Song and the album's darkest piece, "The Altered Blues, named for Leitham's surgeon, Dr. Gary Alter. The mood becomes ironic on "Split Brain, then sunny again on "Lefty Leaps In, "Riff Raff and "The Trashman Cometh.

A number of tunes on The Real Me were written some years ago and have appeared on albums recorded under Jennifer Leitham's "former name, John Leitham. Yes, she has undergone some extraordinary changes since then, but the thing to keep in mind is that, in spite of those changes (and perhaps in some ways because of them), she is a wonderful musician whose prodigious talent remains unchanged. Leitham and the trio are at the top of their game, and The Real Me is (pardon the pun) a plucky adventure from start to finish.

C.O.D.; The Studio City Stomp; Turkish Bizarre; Stick It in Your Ear; Beat the Meatles; Keni