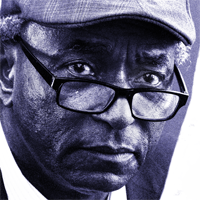 For those who love the blues, the thrill of discovering a new artist is still special. Blues singer John "Blues" Boyd just released The Real Deal—at 71 years young—as a testament that the blues continues to be a vital American art form that will never die. Born in Greenwood, Mississippi, Boyd picked cotton as a youngster, worked at hard labor, and loved to sing. Relocating to the Bay Area in the 1980's he was a roofer, sat in at local clubs, retired, and took care of his ailing wife, who passed in 2014. That's when he became a bluesman full time.

Under the tutelage of Jim Pugh at Little Village Foundation, and with the production savvy of Kid Anderson from Greaseland Studios, Boyd was able to make an album of pure blues the way they use to do back in the day. He wrote most of the songs, letting Anderson take over the controls and procure all the accompanying musicians.

Opening with the autobiographical title track, there is an immediate sense of an authentic "big sound" upon which Boyd lays his songs. "You Will Discover," has that up tempo Junior Parker feel, while "That's Big," is a rolling Kansas City swing number carried along by honking tenor saxophones. Everyone knows that blues and barbecue go together, and "The Smiling Pig," is a humorous stinging tribute to that perfect combination. The classic west coast shuffle of T-Bone Walker influenced "That Certain Day," and "Be Careful With Your Love, offering a nice cadence where Boyd feels cool and collected.

Memphis, and the Stax sound come to mind on "I'm So Weak Right Now," highlighted by the great organ work of Jim Pugh. Shades of an early B.B. King slips into "When Your Eyes Met Mine," contrasted by the Chicago style of "Screaming In The Night," which features Frankie Ramos on the howling sax. "I'm Like A Stranger To You," has him crying and pleading, and "Dona Mae," is a reflective ballad composed as a moving tribute to his wife.

The selections come full circle on the closing "John, The Blues Is Calling You," Boyd taking a closer look at himself, and how things turned out. As with many blues singers that came before him, John "Blues" Boyd, is a storyteller who lived an interesting life. He has certainly been there, done that, and now is enjoying the opportunity to sing his songs. Great credit goes out to Pugh and his Little Village Foundation for his dedication to discovering and recording these interesting artists, and keeping the blues alive.

I Am The Real Deal; You Will Discover; I’m Like A Stranger To You; That’s Big; The Smoking Pig; That Certain Day; Dona Mae; I’m So Weak Right Now; When Your Eyes Met Mine; Screaming In the Night; )Have You Ever Been To) Marvin Gardens; Be Careful With Your Love; John, The Blues Is Calling You.