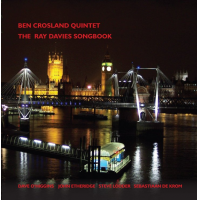 Given the number of hit songs Ray Davies has written over his years fronting The Kinks, it's astonishing that nothing like this CD has ever seen the light of a laser. There have been a myriad of Beatles tunes set to jazzy interpretations plus jazz covers of the music of other 1960s rock stars including Jimi Hendrix, (Gil Evans) and even The Rolling Stones (Joe Pass). A further example is found on the excellent, if slightly bizarre, Experiments With Pops by the late Gordon Beck with John McLaughlin attacking The Who's "I Can See For Miles." So you wait fifty years for one song and then twelve expertly arranged jazz covers of The Kinks' music arrive at once.

The funk-laden "All Day And All Of The Night" offers not Dave Davies's eviscerating guitar solo but a no less blistering one by the redoubtable John Etheridge. The mood relaxes with a tender version of the timeless classic "Waterloo Sunset," with Ben Crosland tastefully and unusually executing the opening melody line on bass guitar. A laid-back version of "You Really Got Me" sharply contrasts with the original and benefits from Etheridge's typically fluid guitar solo. Etheridge has already interpreted the music of Frank Zappa with his Zappatistas so this is not totally new territory for him.

"See My Friend" falls foul of a common mistitling error since it's actually "See My Friends" but you wouldn't know it for the plethora of Kinks Kompilation albums to be found with that song wrongly-titled. However, the mistitling doesn't affect the welcome sprightliness of this version compared to its rather maudlin original.

Following an appropriately jocular version of "Ev'rybody's Gonna Be Happy," "Sunny Afternoon" is given a half reggae, half jazz treatment which works well. By contrast "Dedicated Follower of Fashion" is corny but charming. Dave O'Higgins produces a lithe tenor solo on an upbeat "I Need You" followed by some bluesy blowing from Etheridge. "Set Me Free" is faithful to the original with the melody traced out on tenor sax. Likewise on "A Well Respected Man," O'Higgins leads the melody on tenor over a brisk 4/4 beat and there's another coruscating Etheridge guitar solo here too.

What distinguishes this set from the ghastly orchestral cover versions of hits of the 60s, prevalent during that decade and beyond (perpetrated as cinema intermission muzak), are the sensitive and sophisticated arrangements, such as the score for "Tired Of Waiting For You." The poignant "Dead End Street," arguably one of the first pop songs to reflect a socio- political message (intentionally or not), is imbued with even more pathos courtesy of Dave O'Higgins's wistful soprano sax. This is a very welcome release of deft and intelligent interpretations, celebrating the idiosyncratic songs of Ray Davies, a man without whom twentieth century popular music would certainly have been the poorer.

All Day and All of the Night; Waterloo Sunset; You Really Got Me; See My Friend (sic); Ev'rybody's Gonna Be Happy; Sunny Afternoon; Dedicated Follower of Fashion; Tired of Waiting for You; Dead End Street; I Need You; Set Me Free; A Well Respected Man.