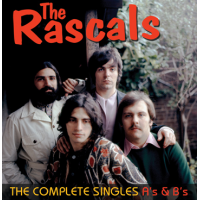 The career trajectory of the 'Young' Rascals took them from a point in music culture where singles were the focal point of both art and commerce to a point where the album was a work unto itself rather than a collection of singles. As much as it's aimed at a true devotee of the band, The Complete Singles also holds great attraction for the musiclover who wants to delve into this particular period of contemporary rock and pop: in that light, it's a scholar's delight not to mention a completist's: who knew there were Spanish and Italian version's of "Groovin'?"

It's also further tribute to Real Gone Music's archival efforts that, with little overlap of material despite an almost identical time frame, A's & B's is a comprehensive supplement to Anthology 1965-1972 (Rhino Records, 1992). Even apart from the research and collation of recording details (right down to master id numbers), plus the remastering of forty-seven tracks in chronological order as originally issued on the home of contemporary r&b/soul before the 'blue-eyed' kind became fashionable), Atlantic Records (combined with the later not releases so well-known on the Columbia label), essayist Ed Osborne's procurement and inclusion of up-to-date interviews with bandmembers reveals the thought behind coverage of the evolution of the Rascals' work when they were no longer 'young.'

Specifically, the group's move to more relevant, topical material was a conscious decision to keep in line with the times, at least as keyboardist/vocalist/songwriter Felix Cavaliere describes it. It's debatable how much that approach directly resulted in a slow decline of the band's success from the zenith presented by "How Can I Be Sure?," but such a self-conscious approach is often the bane of good pop and the antithesis of the natural and succinct method of expression at the heart of the concept of the single the Young Rascals had theretofore perfected. That said, the natural progression into the more ornately arranged likes of "Wonderful" only built upon the prior success and rightly so: as in evidence there, and even more prominently on "A Beautiful Morning," strings and horns are an integral part of the r&b style from which Cavaliere, vocalist Eddie Brigati, drummer Dino Danelli and guitarist Gene Cornish forged their own sound.

Yet there's little denying how dated is the sound of Farfisa organ on "Mustang Sally:" uncannily of a piece with The Sir Douglas Quintet's "She's About A Mover" from the previous year of release and markedly in contrast to the classic swells of Hammond B3 that adorn "People Got To Be Free," "I Ain't Gonna Eat Out My Heart Anymore" is a more convincing melding of rock and soul than this deliberate nod to roots, as is "You Better Run." "See," however, may be superior to both, from the heavy electric guitar to the effective phrasing of the lead vocal and on to the driving drums.

The dissolution of the Rascals' bond had its upside, at least insofar as Cornish contributed more original material like "Away Away." The composer speaks as candidly as Brigati and Cavaliere about the inexorable breakdown of the original quartet's camaraderie, which only puts a more positive light on so many of the twenty-one tracks on the second CD here, where the clarity of the sonics are right in line with the expanded arrangements and extended improv in evidence on "Love Letter." In his solo career, the keyboardist, composer and linchpin of the Rascals has not just a right but an obligation to remind his audience(s) of the wealth of material encapsulated on The Complete Singles A's & B's.

CD 1: I Ain't Gonna Eat Out My Heart Anymore; Slow Down; Good Lovin'; Mustang Sally; You Better Run; Love Is a Beautiful Thing; Come On Up; What Is the Reason; I've Been Lonely Too Long; If You Knew; Groovin'; Sueno; A Girl Like You; It's Love; Groovin'(Spanish version); Groovin'(Italian version); How Can I Be Sure; I'm So Happy Now; It's Wonderful; Of Course; A Beautiful Morning; Rainy Day; People Got to Be Free; My World; A Ray of Hope; Any Dance'll Do. CD 2: Heaven; Baby I'm Blue; See; Away Away; Carry Me Back; Real Thing; Hold On; I Believe; Glory Glory; You Don't Know; Right On; Almost Home; Love Me; Happy Song; Lucky Day; Love Letter; Brother Tree; Saga of New York; Hummin' Song; Echoes; Jungle Walk.