By MARTIN LONGLEY
January 18, 2009
Sign in to view read count 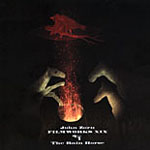 This is number XIX in Zorn's Filmworks series, his self-confessed outlet for accessible composition, at least throughout most of its editions. The saxophonist doesn't actually play on this soundtrack disc, concentrating on writing, arranging and conducting. The result is a sequence of what must surely be Zorn's most restful, reflective, melodic and lyrical music, performed by the highly sensitive chamber trio of Erik Friedlander (cello), Rob Burger (piano) and Greg Cohen (bass). The Russian animator Dimitri Geller was seeking to license some pieces from Zorn's Book Of Angels series, but Zorn suggested instead, that for a similar fee he'd be able to pen original music, specifically tailored to the director's planned short, a parable piece that would only be 12 minutes long. Zorn ended up recording a 40-minute disc in a day-long session, allowing Geller to pick and splice his own selections.

Has Zorn now unrolled a downy bed for a new future as a Romantic composer? Genre identification is impossible, as elements of classical, gypsy, klezmer and jazz are swirled around, with the end result being categorizable as none of these forms in their naked state. Friedlander frequently plays his cello up in what's almost a tearful violin range, sweetly singing with no trace of friction or drag. Cohen is tastefully present, set on cushioning the more emotionally outward sounds of cello and piano. Burger flamboyantly cuffs out glassy shards from his keys, while subtly dampening others. "Bird In The Mist" reveals a melancholy sensitivity, "Parable Of Job" is explicitly Oriental and the title track reflects and expands on the work's central theme. This music is magically luminescent and in any blindfolded test it would be impossible to identify Zorn as its composer.

Tears Of Morning; The Stallion; Tree Of Life; Wedding Of Wild Horse; Forests In The Mist; Dance Exotique; Bird In The Mist; Parable Of Job; Encounter; The Rain Horse; End Credits.