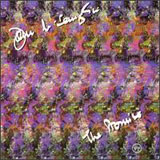 Some highly respected music critics criticized this 1996 effort as a hodge-podge of musical ideas with no central theme. However, they are mistaken. Clearly the thematic nature of this outing was the diversity of the music itself. The original tunes are compositionally strong, and the playing throughout is purposeful and exquisite. McLaughlin has gathered several of his friends—who happen to occupy the higher echelons of music—for The Promise 's musical journey through genres ranging from the all-out bombastic fusion of "Jazz Jungle" to the Euro-Indian strains of "The Wish". A vast list of musicians join the festivities.

The Promise was the jazz guitar event of 1996. The Beck/McLaughlin reworking of John Lewis' tune "Django" is itself worth the price of admission. Beck's playing opens the piece and the album, making you wonder whether even the great McLaughlin can compare. He does, of course, and in such a way as to make any comparisons an exercise of nonsense. Their interplay is complimentary and utterly brilliant. They should record a whole album together.

"Jazz Jungle" is a true fusion number. Its energy is greater than that of a jumbo jet during take-off (which is also a good description of Dennis Chambers' drumming on this tune). John McLaughlin, at 54, can still wail with purpose better than any young pretender to the throne. Amazing. Guest musician Michael Brecker makes his mark on this piece as perhaps the finest fusion saxophonist on the scene.

"Shin Jin Rui" features a reunion of sorts with jazz-pop sax man David Sanborn. Sanborn doesn't seem to take chances like this on his own albums. He is sympatico with McLaughlin. (Check out Sanborn's appearances on two other McLaughlin albums, Electric Guitarist and Electric Dreams. )

The Promise falters only once. "No Return" is a fun idea but goes on a few minutes too long.

The Promise also features the brief returns of The Free Spirits, The Guitar Trio, and an electric version of Shakti. It is a potpourri of musical styles and performers. Yet, despite its disparate compositions and styles, the record manages to be a cohesive work of art. Spoken passages lead the way, and even a short one and a half minute jam with Sting makes sense in context. Bravo!