The Karminsky Experience: The Power of Suggestion 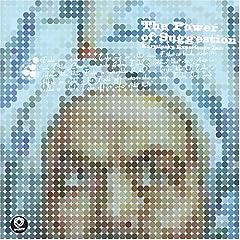 For those who need boxes to check for their music, The Power of Suggestion is somewhere between downtempo, lounge, and soundtrack. With those trivialities dispensed with, here's the scoop on the music. Producers Martin Dingle and James Nunns have released two EPs since they teamed up as the Karminsky Experience in 1991 and formed their own record label in 1997. This is their first record, and an auspicious debut.

There's nothing particularly experimental or difficult about The Power of Suggestion, and that's part of its charm. You can play the record through, pay attention to its (ample) subtleties or let it roll in the background, and either way there's something to be gained. But don't mistake that as a deficit in creativity; quite the opposite.

Each of the fourteen tracks on the record has a distinct tone, though as a sum they clearly constitute a suite. That's where the cinematic part comes through. Moments of ebb and flow, drama, and suspense dot the record in unexpected ways that end up telling a story. "Assignment Istanbul" is perhaps the most direct example of this sort of thing, fading in as a series of pulsing orchestral blocks with understated percussion burbling underneath, then evolving into a resonant, consonant beat-driven epic which meanders home along a winding path.

The duo plays with various rhythmic forms, as on "Shall We Dance?", with its bouncing African-style polyrhythms; or "Exploration," which casts a funky breakbeat against short melodies and psychedelic vocal samples ("well, I look at stars!"). Twists both up and downtempo come in and out, keeping the variety at a generous level.

Provided you're into a revolving-door aesthetic where one style morphs into another and rarely looks back, The Power of Suggestion is a wonderful record. It's certainly had way more than its share of spins on my player.

Visit the Karminsky Experience on the web. The record is available from Groove Distribution and other online sources.

1. Departures 2. Assignment Istanbul 3. The Power Of Suggestion 4. Belly Disco 5. a Little Happening 6. Introducing Louis Pachini 7. The Wayward Camel 8. Shall We Dance? 9. The Hip Sheik 10. a Curious Observer 11. Exploration 12. Behind The Bamboo Curtain 13. Audio Sonic 14. Something For Madeleine