By DAN MCCLENAGHAN
December 11, 2016
Sign in to view read count 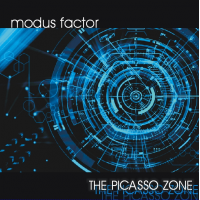 Modus Factor, a trio based in Toronto, says it creates "Electro ambient improvisational bedlam." An accurate description of their sound except, perhaps, for the bedlam part (for the most part). Featuring a drums/bass/electric trumpet line-up, with effects, the comparisons that come to mind are Nils Petter Molvaer's spacey approach on sets like Switch (OKeh Record, 2014) and Buoyancy (OKeh Records, 2016). And speaking of bedlam, a line could be drawn to trumpeter Cuong Vu's steroidal ambience.

But Picasso Zone, Modus Factor's debut, trades more in funk, groove and wah wah, bringing at times a dance-ability to their sound, like some of the slices from Miles Davis' On the Corner (Columbia Records, 1972), mixed with a late career Davis' masterpiece, Aura (Columbia Records, 1989).

Brownman Ali's electric trumpet is the lead voice in the group. He makes the most of the electricity aspect. Bassist Ian De Sousa digs deep into the grooves and contributes, via effects, to plugged-in drones and tranquil ambiences; and drummer/bandleader Chris Lesso goes back and forth between hard-driving rhythms and delicate textural weavings; and the group gives perfect backing to Maya Angelou's reading her "Still I Rise."

The music, in spite of its improvisational nature, sounds quite structured—a testament to the skills of the musicians. "Afindia" wraps the sounds of two continents, Africa and India, into one package. "Rounded Corners" seeps in from outer space, with a the sonic wavering of an alien ship's power source interwoven with the extra-terrestrial language of the electric trumpet. "King Ghidorah" conjures images of gargantuan monstrosities creating an implacable 'bedlam" in a landscape of tall buildings, with Brownman Ali breathing fire.

The Picasso Zone is exciting debut from Toronto's Modus Factor. They've opened a door to a fresh sound.