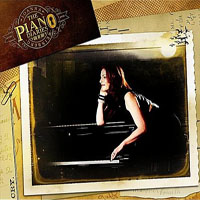 Joanna Weinberg's The Piano Diaries is not exactly jazz, but it is also not exactly not jazz. Intended for the small stage—appropriate, given her work in several musicals and one-woman shows—the singer/composer's music lives in that overlap between cabaret and jazz. Relocating from South Africa to Sydney, Australia in 1997, the London-born Weinberg is a true cosmopolitan, despite still sounding curiously homespun. All of this makes for an interesting and heady mix of musical and lyrical creativity.

The Piano Diaries' music and instrumentation take a backseat to Weinberg's clever and intelligent lyrics by necessity, but the music remains appropriate. Rafael Nazario's Beatle-esque piano runs over the bouncy melody of "Benjamin and Penelop," while saxophonist Mark Ginsburg's soprano suggests a cross between Fiddler on the Roof with Blade Runner on the Eastern European-flavored "Winds of Fear." Weinberg's accompanists are just assertive enough to give these songs a hooked edge ready to implant themselves into an internal iPod for days after hearing.

But again, it is Weinberg's lyrics that are queen here, ruling the funny bone benevolently. Consistently infusing her lyrics with whimsy and fun, there's the goofy/sexy stance of "Innocence":

So come to me darling
with your pale wounded feet
we'll get out of the spotlights
and we'll make love in the middle of George Street.

Weinberg creates a similar plight on "Benjamin and Penelope":

Benjamin and Penelope
played in the nude
and covered the music with food
and got in the mood.

She weaves pure poetry in "Witness" with:

You walk a mile, in broken shoes

to meet a man, who has forgotten

the pavement cracks, the weeds begin

and I am there to tend your garden.

That is smacking good writing, whatever the meaning.

Weinberg's music will not be mistaken for Kurt Weill or Bertoldt Brecht, and Weinberg is neither Marlene Dietrich nor Ute Lemper. She is more effervescent and bright than these dower Germans, whose charm emanated from the black comedy of Wiemar Berlin song houses. Weinberg's is more the cabaret of the 21st Century: fairly well-scrubbed and simple—honesty with humor.

Freckled Angels; Innocence; Daughters of the Empire; The Artists are Leaving; Benjamin and Penelope; The Winds of Fear; Wide Open Eyes; Beautiful Old Man; Witness; Mama Buy Your Baby a Piano; Trophy Wife; The Piano at the Cabaret.