By BRUCE LINDSAY
March 4, 2011
Sign in to view read count 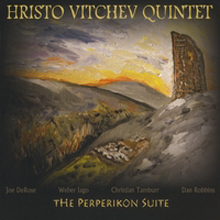 The Perperikon Suite consists of seven tunes inspired by and dedicated to the ancient Thracian capital city. The ruined city is in the east of Bulgaria, home country of composer, guitarist and bandleader Hristo Vitchev. The Perperikon Suite is his third album as leader, while the work itself was premiered at the 53rd Monterey Jazz Festival in 2010. The music, performed by a terrific quintet, is beautiful: it captures images not of a city in ruins but of a city full of life, of vibrant activity.

Vitchev is beautifully melodic, with a sound that readily echoes the great lyrical jazz players—Kenny Burrell, Wes Montgomery, Bucky Pizzarelli—rather than taking his inspiration from those with a more rock-oriented style. He's certainly capable of fast, hard-toned musicianship as his rhythmic patterns on "The Acropolis" demonstrate. But his warm-toned, single-note playing on the more relaxed and reflective tunes such as "The Southern City" is especially attractive.

Vitchev's fellow musicians all have key roles to play in the overall sound. They are uniformly excellent, both as ensemble players and as soloists. A front line of piano, guitar and vibes can suffer from a lack of clarity, the instruments blending into each other and losing individuality, but there is no such problem here. The three musicians have distinctive tones that are readily identifiable and Vitchev's production ensures clarity of sound.

Weber Iago was a 2009 Latin Grammy nominee. His piano playing on "The Southern City" is an object lesson in lyrical, pure and affecting soloing. In contrast, his playing on "The Great Hall" is edgier, more percussive, reflecting the tension created by drummer Joe DeRose. Vibraphonist Christian Tamburr's standout performance is on "The Palace." The tune is a flowing, mid-tempo, composition and Tamburr's solo is in perfect synchronization with the mood of the piece.

DeRose's drumming on "The Great Hall" is extraordinarily effective with a driving, emphatic, almost metallic sound that brings a tension and energy to the tune. Bassist Dan Robbins spends most of his time in the role of the band's rhythmic center, as is the lot of the talented and reliable bassist, but his emphatic, positive solo on "The Shrine of Dionysus" and his arco playing on "The Southern City" are outstanding.

The Perperikon Suite is an impressive creation. Each individual tune is beautifully crafted, but so, too, is the Suite as a whole. Vitchev's response to the ancient city is remarkable in both its conception and its performance.