Billy Strayhorn: The Peaceful Side

By JOEL ROBERTS
August 1, 1997
Sign in to view read count 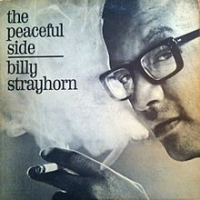 During his twenty-five year tenure with the Duke Ellington Orchestra as composer, lyricist, arranger, and Duke's closest musical confidante, Billy Strayhorn rarely performed in front of a live audience and even less frequently entered a recording studio. Although his piano playing can be heard on a handful of records with the Ellington Orchestra as well as on some of its members' side projects, most notably several dates with Johnny Hodges, Strayhorn made just one album as a featured solo artist. That album, the Peaceful Side of Billy Strayhorn recorded during two overnight sessions in Paris in January 1961, has recently been reissued in the original mono version on Capitol Jazz. It offers a unique opportunity to hear this brilliant composer's own takes on some of his best-known songs, including "Lush Life," "Take the A Train," and "Chelsea Bridge."

It was certainly not a lack of technique that kept Strayhorn from recording more often. A classically trained pianist, his playing here is exquisite, evoking the impressionism of Debussy almost as much as the driving jazz of Ellington. This is a quiet, spare recording featuring just Strayhorn's piano with occasional accompaniment by bass, string quartet, or vocal chorus. Strayhorn brings out all the passion and melancholy of his own compostions, which are performed in much more relaxed tempos than we are used to hearing. Even "'A' Train" is treated as a moody ballad. Other highlights include a gently swinging "Just A Sittin' and A Rockin,'" and an exquisite version of the haunting "A Flower is a Lovesome Thing." It is a shame that Strayhorn did not record more, since he brought the same extraordinary musical intelligence and sophistication to his piano playing that he did to his composing.