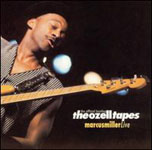 Marcus Miller is the Paul Chambers of the electric bass. His recordings possess the same bass- leadership as Mr. PC, reflecting the spirit in the title of one of Chambers’ 1950s Blue Note releases, Bass on Top. Miller mixes a potent brew of originals and modern jazz classics to produce a sumptuously funky meal of what is certainly not smooth jazz. To my conservative ears, Miller simply picked up where he left off with Miles on Tutu. He is most certainly a virtuoso, but not so troublesome as Jaco Pastorious. Miller is a traditionalist in that, like Jaco, he never abandoned the modest four-string electric bass for its sexier multi-string cousins. More than that, Miller continues to use the Fender Jazz flavor. I would simply define Mr. Miller’s musical approach as no bullshit.

is a double live recording seductively subtitled "The Official Bootleg." That is a nice marketing touch, even with minimal editing and remixing, but this recording is every bit as slick as Miller’s last two live recordings. His formula remains constant: funky modern jazz classics and some quasi-traditional vocals (here it is Lalah Hathaway singing). Make no mistake, Miller is front and center in this effort, where he should be. Listen to "So What" followed by "Lonnie’s Lament," and you'll immediately recognize that Marcus Miller is not Boney James or Kirk Whalam (not that there is anything wrong with smooth jazz; everyone needs to start somewhere to get to the Source).

In the meantime, check out this set and Miller's previous record M2. And listen to what Miles had in mind when he veered off into hip-hop prior to his death.