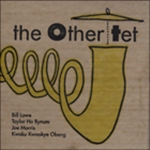 The seemingly innocuously titled The OtherTet is far from an exercise in making-music in a modern idiom. A generation ago, speculation would be rife about minimalism and atonalism, terms that are laughable in today's context of existential angst. Therefore, when contemporary musical compositions delve into the macabre and the irony of contemporary existence a new idiom is born. One that combines the lament of the blues with the expressive rhythmic riches of Afro- centricity and the reinvention of music on brass and strings. In the hands of artists such as trombonist/tubaist, Bill Lowe cornetist/flugelhornist Taylor Ho Bynum, bassist, Joe Morris and percussionist Kwaku Kwaakye Obeng, the artistic endeavor is raised to the level of high art. The fine line between cacophony and magisterial music is always bridged and never crossed, not through seven surly compositions that belong to this journey called The OtherTet

In what may be a clever play on words, Tet might refer to the legendary violent expedition in Indochina almost 50 years ago. It also draws a comparison between that black op and the assaults on true human progress today, throwing the later into oblique, but sharp focus. "One Other" and "Cold Day Clip" combine Afro-blue modes in relatively free time, thanks to Obeng's inspired polyrhythms. On "Cold Day Clip," Morris does a masterly job of shaking up the walking flow of the song and then playing against Obeng's melodic talking drums. By the time Bynum rejoins the ensemble towards the latter third of Lowe's wonderfully sinister piece, the singular loneliness of The Last Post is strongly evoked.

Lowe is especially unforgettable on "Naptown/Trenton" and "Cold Day Snap," playing both tuba and bass trombone. He uses multiple overtones to enrich the dark narrative that holds the compositions together in riveting manner, while Morris' bass weaves the magical carpet of sound together. Bynum's "Dreamsketch" and "Look Below" are characteristically puckish in their walking manner, and feature Lowe, the cornetist's musical partner for several decades, while he adds almost piano-like glissandi on his own short horn. The other three group efforts round off this truly alienating set in the grand Brecht-ian manner.

While the suggestion of a socialist agenda may be inimical in today's North America, there is no escaping the somewhat strident instrumentation that portends the imminent destruction of capitalistic stasis. Urban music comes redolent with many splendored examples. The music of The OtherTet is a fine testament to committed artistry.