Curios: The Other Place 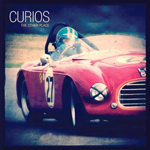 The Other Place is the third album from Curios, the British piano trio. The band's reputation has been steadily rising since its formation in 2006—critical acclaim accorded to their first two albums, Hidden (Jazzizit, 2007) and Closer (Impure Music, 2008) and the 2008 BBC Jazz Award for Best Band have all helped to raise Curios' profile.

All the tunes on The Other Place are penned by pianist Tom Cawley, who has also written for singers such as Gwyneth Herbert and Tammy Weiss. Cawley's love for Formula 1 motor racing—which he shares with bassist Sam Burgess—is once again an inspiration. Two tunes, "Belief" and "2009 World Champion," are written for the British driver Jenson Button—who previously lent his first name to a tune on Closer—while "The Swan" was inspired by an interview by Ross Braun, owner of the Braun Formula 1 team. The album's cover photo of a racing car and the titles of "Pursuit" and "Roadster" suggest yet more motoring inspiration—but this inspiration is subtle rather than blatant with "Roadster" being the only tune that comes close to betraying its automotive roots.

"Pursuit" opens the album with a solid rhythm from Burgess' bass before Cawley and then drummer Joshua Blackmore join in—the title is apposite, as all three musicians seem to be in pursuit of each other. Burgess continues his rock steady beat while Cawley and Blackmore play with patterns and melodies until all three slow down and soften their playing as the tune moves to a relaxed and beautiful close. Relaxed beauty also characterizes "Plea," the brief and delicate "Dream" and "Belief," which features some lovely bass from Burgess. "Belief" moves almost imperceptibly into "2009 World Champion" which is characterized once again by Burgess' solid rhythm but also by Blackmore's hip-hop influenced percussion. The tune ends with Cawley plucking the piano strings directly, closing the album with light, metallic echoes.

For the most part the trio performs on acoustic instruments but on a couple of tracks Cawley introduces a loop effect—with mixed results. On "Impure" the effect is used to underpin much of the track, adding a subtle foundation on top of which the musicians build layers of sound. On "Pure," by contrast, the effect is much more upfront—acting almost as another lead instrument—detracting from the beauty and, indeed, the purity of the tune.

Curios has built a deserved reputation as an innovative and exciting trio. The Other Place consolidates this reputation—it's not the great leap forward that some may have expected but it ensures that the band retains its place at the forefront of the British jazz scene.