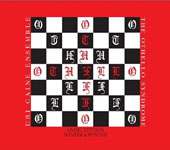 Uri Caine, in his own unique way, surveyed music from the Classical era with The Classical Variations (Winter & Winter, 2008) and The Plays Mozart (Winter & Winter, 2007). Caine moves both forward to Late Romantic Opera and back, picking up from Wagner in Venezia (Winter & Winter, 1997), with The Othello Syndrome. The disc title is a play on two things: the Giuseppe Verdi Opera Othello (1887) and the common name for delusional jealousy, both after the Shakespeare protagonist. The musical result here is a wild ride in a fast machine.

All of these musical and literary allusions would make this recording almost too rich to be heard. Couple this intelligence with a cast of the hippest musicians performing, including trumpeter Ralph Alessi, super-guitarist Nguyê Lê, and clarinetist Chris Speed and the experience is like adding a pat of butter to a bowl of cream chowder. But this is all good. Uri Caine has defined his corner of jazz to a point that he has no peer and that corner is ever fascinating and endlessly revealing and entertaining.

It is useful, but not necessary, to have at least listened to the Verdi opera. Caine deftly extracts Verdi's essence and casts it as he has previously with the music of Mahler on Gustav Mahler in Toblach, Bach on The Goldberg Variations, and Beethoven on Diabelli Variations. The pianist adds his own essence in the form of Jewish/European folk instrumentation and performance. The effect is as delightful here as on his previous recordings. Clarinetists Speed and Achille Succi provide the Klezmer flavor, while Lê adds the modern, rock opera ambiance, particularly the opening "Othello's Victory" and "Drinking Song."

Caine adds a bit of free association with "Fire Song," allowing the piece to fall into a silent movie soundtrack mode. The piece is closely composed and arranged. The "Love Duet with Othello" begins as a thoughtful vocalese, with gospel and Americana elements, and "Iago's Credo" is cast as a recitative that dissembles into competing voices expressing any number of delightful vulgarities and nihilistic dreams. In short, The Othello Syndrome is Uri Caine at his mad scientist best: conjuring music from a million different places and making it sound like it was with you at home all the time.

Othello's Victory; Fire Song; Drinking Song; Love Duet with Othello and Desdemona; Introduction to Act II; Iago's Credo; She's the only one I love; Iago's Web Desdemona's Lament; Am I a Fool?; The Lion of Venice; Othello's Confession; The Willow Song/Ave Maria; Murder; The Death of Othello.