By JIM SANTELLA
September 1, 2000
Sign in to view read count 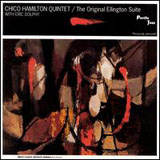 The late 1950s were significant to jazz. Fresh ideas were being developed and new directions were about to become reality. The same is true, of course, for our world history of that era. Everyone was affected.

Previously unissued, The Original Ellington Suite was recorded August 22, 1958 in Los Angeles. A different Chico Hamilton Quintet (his first), with Buddy Collette, Jim Hall, Fred Katz and Carson Smith (plus Paul Horn), recorded these Ellington pieces several months later and released an album. This session, however, with Eric Dolphy, John Pisano, Nate Gershman and Hal Gaylor, remained a secret for over 40 years. It contains Dolphy's first recorded solos, in which his alto saxophone work closely follows that of Charlie Parker.

Chico Hamilton's quintets had a sound like no other. Employing modern jazz flute and expressive cello alongside walking bass, rhythm guitar and his swinging drum set, Hamilton's second quintet steered its unique timbral combinations through arrangements that were tinged with classical leanings. The Modern Jazz Quartet was doing something similar at the time, but with a different viewpoint. Hamilton added timpani sounds and a growing list of woodwind and string sounds, which were somewhat new to jazz at the time. This album represents some of John Pisano's best solo work. Dolpy plays alto sax on four movements, flute on three, and (soprano) B-flat clarinet on two. The Ellington pieces are tied together as a suite with no breaks between movements. "Day Dream" is a lush and lovely cello feature, while "In a Sentimental Mood" recalls Johnny Hodges' alto ballad style. Performed at a relaxed tempo, slow and cool, Chico Hamilton's modern jazz setting of Ellingtonia is timeless and recommended.

In A Mellotone; In A Sentimental Mood; I'm Just A Lucky So And So; Just A-Sittin' And A-Rockin'; Everything But You; Day Dream; I'm Beginning To See The Light; Azure; It Don't Mean A Thing.