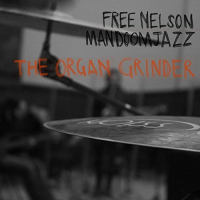 Search as far and wide as you like but you won't find any one band that sounds like Edinburgh, Scotland's Free Nelson Mandoomjazz. You CAN find about eight, though: Their sprawling, monstrous "doomjazz" combines harmonic and rhythmic streams from various free jazz and heavy metal schools, including and especially Black Sabbath, Albert Ayler, Electric Wizard, Sonny Rollins and Wayne Shorter. "The initial concept of the band was quite straightforward: doomjazz. 'Let's see if we can combine these two seemingly disparate genres,'" recalls bassist Colin Stewart. "But I think since then we've developed a lot in terms of what we can each bring to the group."

Saxophonist Rebecca Sneddon agrees that the band's compositional approach has progressed since they first began to The Organ Grinder, their third release. "Each of us has taken a more collaborative role in writing for all instruments, not just our own," she suggests. "I think we all have a strong desire to push the boundaries of our own instruments, which creates limitless possibilities in composition."

On The Organ Grinder, their uniquely primal and minimalist trio sound—completed by percussionist and keyboardist Paul Archibald—sounds more tightly wound than ever. So tight, in fact, that it often explodes, right from the leadoff "Open The Gate," the thunderous sound of an awakening giant's first massive footsteps, treading a bass line so thick and heavy that you can chew it; meanwhile, drums tumble and splash and, from a distance, saxophone wails like Ayler or Archie Shepp wading into the deep end of a Black Sabbath bender. "Inferno Pt. 1" and "Always Go Left in the Maze" explore this same deep, profound rhythmic and harmonic darkness. You might think you could find sunshine and lightness of being in a piece titled "Bicycle Day," but you'd be mistaken.

Due to the pure and singular vision of the main ensemble's collective approach, guest musicians Patrick Darley (trombone) and especially Luc Daoud Klein (trumpet) considerably impact the Mandoomjazz sound. "All three of us have worked with Luc Klein before in various jazz/blues projects," Archibald explains. "We first met in 2010-2011. For some years now he's been living in Amsterdam as part of the jazz scene there. One of my earliest ideas for the album was that I wanted to do a take on 'Calcutta Cutie' by Horace Silver. We needed a trumpet for the head so I asked Luc to join us for that track."

"Horace Silver is a very important artist to me," Archibald continues. "He's what got me listening to jazz in the first place."

Archibald's piano and Klein's trumpet nudge "Calcutta Cutie" into a jazz sort of shape: Stewart's metronomic bass rocks in one direction while the piano chords tug the music in the other, and sax combines with trumpet in a be-bop harmonic attack. Darley's trombone joins Klein's trumpet to paint "LORA" in jazz sound, bass and drum the only accompaniment for trombone and trumpet solos that sound, in these stark surroundings, lost in deep, far-off jazz space.