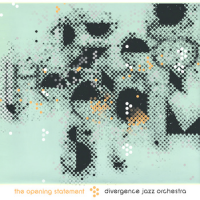 Yet another big-band album to be filed under "p" for "pleasant surprises." Jenna Cave is an Australian composer / arranger whose Opening Statement as leader of the Divergence Jazz Orchestra is remarkably strong and consistently pleasing. While her age isn't given in the album notes or online, a brief search has found that Cave was in school as recently as 2010, and from the photos at her web site and elsewhere, looks as though she could still be at a university (or even in high school). Be that as it may, Cave writes with depth and maturity well beyond her years, a virtue not lost on the DJO, which carries out her wishes to the letter.

As a contemporary composer, Cave has given ear to others in that vein such as Maria Schneider, Carla Bley, Darcy James Argue, Satoko Fujii and their peers, but always with her own personal voice, honed during study with Miroslav Bukovsky and William Motzing, among others. Like those exemplified above, Cave does not operate within a traditional big-band framework, painting for the most part in silken pastels instead of reverberant colors. On the other hand, she clings steadfastly to the basic elements of melody, harmony and rhythm, and can swing when needed, as on the Caribbean-style opener, "A Stranger in Helsinki." Elsewhere, tempos and phrasings are generally more sedate but no less engaging because of it.

"Flash in the Pan," featuring trombonist Brendan Champion, glides along smoothly to a charming shuffle beat, while Cave employs New Orleans-style cadences to underline the emphatic "Jazz Euphoria on Frenchmen Street." Bracing rhythms enliven the genial "Odd Time in Mali," which spotlights trombones, reeds and Luke Liang's mellow guitar. "The Opening Statement," which actually ushers in the finale, is a lovely through-composed ballad whose absence of solos is offset by splendid ensemble interplay. The session's other ballad, "Dear Miss Upstill," is followed by the sauntering "And Then There Was One," featuring tenor saxophonist Evan Harris and drummer James McCaffrey.

Cave's charts (save for "Statement") earmark solo space for a number of her sidemen, and each of them is well-schooled and reliable. Besides those mentioned, they include soprano Justin Buckingham ("Helsinki"), flugel Will Gilbert and tenor Michael Avgenicos ("Miss Upstill"), trombonist Paul Weber, trumpeter Matthew Collins, alto Joshua Willard and bassist David Groves ("Mali"). With such a persuasive Opening Statement already on record, one waits eagerly to hear what the talented Jenna Cave and the DJO may choose to say next.

A Stranger in Helsinki; Flash in the Pan; Dear Miss Upstill; And Then There Was One; Jazz Euphoria on Frenchmen Street; The Opening Statement; Odd Time in Mali.