Wayne Escoffery: The Only Son of One 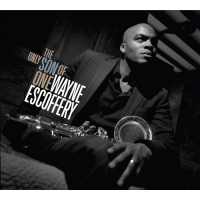 Not since the works of bassist Charles Mingus and saxophonist John Coltrane has there been music so charged with emotion and so engulfed in spirituality as The Only Son of One, an album that bleeds with raw sentiment as it bares the soul of its young saxophonist and composer, Wayne Escoffery, and ultimately brings much catharsis and edification. In the sorrowful and glorious vocalastics of his saxophone, Escoffery reveals the pain and ultimate triumph of his relationship with his parents and, in doing so, emerges frayed but surprisingly whole, humane and, in the process, mature and edifying as a musician. With this landmark album, Escoffery has not only come to terms with the bitterness of his past— especially in the context of an abusive father—but he has created a soulful testament to the triumph of the human spirit, just as his musical ancestors had done before him.

Escoffery is far from being a sentimentalist, despite his decision to exorcise his past by way of musical intervention. Many musicians have done this with little success, but Escoffery's expedition is a soulful, emotional one. As his heart bleeds, he pours out his pain into his tenor and soprano saxophones. Like a decanter on fire, the pain bubbles and boils over, emerging from the bell of his horn in growling and wailing runs that dart and arrow up and down the registers. Despite letting his emotions flow in a bluesy rush from heart through head, Escoffery's virtuosity shines through. His musical phrases and lines are sometimes long and every once and a while they include twisting arpeggios that bare his soul. Although his sound is broad and occasionally moist, his phrases are lean and muscular and often comprise a series of elevations, and as he narrates life lessons vividly, the saxophonist paints graphic images in varying shapes that delve into the fourth dimension. His solos sometimes end in cuboid shapes as they return to the original root of the melody, where Escoffery invents new ways to state his themes and stories.

The saxophonist is aided on his quest by an ensemble that is more than sympathetic to the purpose of his journey. Orrin Evans is his guiding spirit, and his Fender Rhodes often sounds as if it were a guardian angel that shadows Escoffery's horn. The addition of Adam Holzman is an inspired one; the keyboardist adds ambient music that seems to create an ethereal setting for Escoffery's journey. The bassists—Hans Glawischnig and Ricky Rodrigues—make typically virtuoso harmonic and melodic contributions and, together with drummer Jason Brown, they keep things real as well as preventing the melodies from dropping into sentimentalism.

The recording is crisp, with well-defined sound, but it is novelist James McBride's liner notes that make Escoffery's journey bearable for musician and listener alike. McBride's empathy for Escoffery and his predicament is palpable and, for once, a description of songs is not intrusive. The Only Son of One is a significant milestone for Escoffery.

World of the Bardo; Banishment of the Lost Spirit; Perilous Desires; The Only Son of One; If I Am, Who You Are; Selena’s Song; Presumed Innocence; Colour Spectrum; Two Souls.

Title: The Only Son Of One | Year Released: 2012 | Record Label: Sunnyside Records