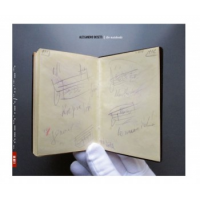 Listening to the work of Alessandro Bosetti reminds me of a friend I have who suffered a lengthy bout with sleeplessness. It wasn't so much the insomnia that tormented him but a pop song (specifically Engelbert Humperdinck's version of "Quando, Quando, Quando") that was stuck in his head. Playing on an endless loop, he feared psychosis. Night after night he returned to his bed to find Humperdinck and that Italian pop song. A simple melody took on immense power. Like my friend, Bosetti's music cultivates the melody of nearly anything, from human speech to animal sounds.

What Bosetti records today onto LPs and CDs was also being registered a century ago by the Czech composer Leoš Janáček (1854—1928) who wrote out "speech tunes," transcribing the melodies and rhythms of speech into a small notebook. His aim probably was to preserve the Moravian and other Slavic voice patterns for his music and operas. With the advent of recording devices, an ethnomusicologist like Alan Lomax in the 1940s could actually capture regional folk music, folklore and dialects. Fast forward to the 21st century, and sound is everywhere. The chatter of televisions in the doctor's office and at the gas pump, and the endless chirping of text, voicemail, and the dreaded Muzak mostly causes us to hear nothing. Unless you are Alessandro Bosetti.

Commissioned by the Janáček Opera Festival, Bosetti created these two "Notebook" pieces, both inspired by the Czech composer, but neither wholly imitative. Transcribed words are spoken in English and Czech (with regional dialects) as fodder for Bosetti, plus a female and male voice to repeat, repeat, and repeat until the words have morphed into melody. The Italian Bosetti takes pronunciation lessons at one point, then restates almost as a child might do to learn a language. His signature keyboard accompaniment of the transcribed melodies is testament to the euphony of the various combinations of words and dialects. Words become something extra. Repeated, they lose their message, change significance. The consequence is an update on Janáček "speech tunes."

"Dante And Beatrice. The Notebooks, Part 2" takes a similar approach with Bosetti's spoken/sung words processed and manipulated by some bizarre computer software. If Janáček and Bosetti have brought our attention to the song in our own voices, then this computer program accentuates the dialect of the phantom in the machine.