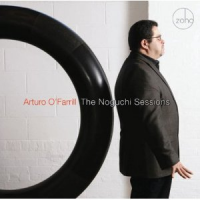 Pianist Arturo O'Farrill has been around the block a few times and is rightly respected for his role in elevating the Latin big band genre, but he has shied away from the idea of recording a solo piano album for a long time. In the fall of 2011, O'Farrill found himself sitting behind a Steinway piano in a museum, ready to finally take the plunge, but he wasn't really alone as he placed his fingers on the keys. He was surrounded by the art-work and creations of Japanese-American artist Isamu Noguchi, whose work served as an inspiration for this project.

Noguchi, who worked as a "sculptor, painter, draftsman, and designer of everything from household goods to large public spaces," never bought into the idea of labeling or strict categorization. His work reflected his own personality and he found comfort in juxtaposing the refined against the raw. O'Farrill found much to admire in both of those ideals, which manifest themselves in this music.

Rhapsodic passages, rubato-laden episodes and racing runs intersect frequently during this journey, as O'Farill performs original music and explores the work of such odd bedfellows as Ernesto Lecuona, Stephen Foster, Randy Weston and Charles Mingus. Several of the early original entries on the program, like "The Sun At Midnight" and "In Whom," come off as queries of musical curiosity, as O'Farrill searches for answers embedded within the keys. This music uses uncertainty as a communicative device, but O'Farrill is more emphatic in other places. He proudly displays his Cuban roots on "Siboney," mines Weston's "Little Niles" for all it's worth and puts on his best display of parlor playing on Mingus' "Jelly Roll."

While O'Farrill's ever-moving work holds interest throughout, he saves the best for last. The flawless foursome that closes out the album—the gliding "Mi Vida," spicy "Obsesion," ruminative-turned-spirited "Oh Danny Boy" and jovial "Jelly Roll"—demonstrates the scope of his talent as a solo pianist. O'Farrill need not have waited to so long to work in this fashion. It appears to suit him well.

The Sun At Midnight; O' Susanna; In Whom; Little Niles; The Delusion Of The Greedy; Siboney; Alisonia; Once I Had A Secret Meditation; Mi Vida; Obsesion; Oh Danny Boy; Jelly Roll.