By FRIEDRICH KUNZMANN
October 26, 2018
Sign in to view read count 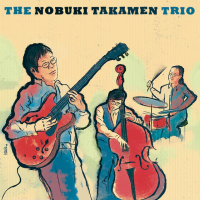 On his seventh release as a leader, New York-based fret-wizard Nobuki Takamen relies on his fellow trio mates, bassist Toshiyuki Tanahashi and drummer Naoki Akiwa, to present a set of exclusively original material. On The Nobuki Takamen Trio, he not only substantiates his reputation as a natural-born bop guitarist, but also proves he is a gifted composer with a highly versatile repertoire.

Opening the album at its most sober, "The Circle Game" finds the trio swirling around its downward spiral of fifths in a most uncompromising fashion. At its core, the composition is vested with a catchy motif, repeated once in its tonic, before transposed and repeated on the IV. Green and Montgomery are obvious references that come to mind, especially when Takamen departs on a run of scales and switches into octave-mode.

But there is more to Nobuki Takamen's playing than imitations of others' past accomplishments. Apart from his unique phraseology, and a self-evidence for a wide harmonic landscape—on display in his solos—he furthermore draws from a multitude of different genres and melts them into something distinctively his own.

The Latin rhythm workout, "A-Tico-Ta" (the sole feature for percussionist Akihito Yoshikawa), or the folk-infused "3AM," are representative of this diversity and keep the album interesting throughout. While the aesthetic choice of creating a dry-sounding room works very well for the more bop-oriented tunes, others tend to suffer from a lack of spatial and dynamic detail and would have benefited from a slightly more modern approach with a sprinkle of delay here and there.

However, what some songs on The Nobuki Zakamen Trio lack in production and mixing values, they make up for in memorability and their subtle yet intricate execution. If the nostalgia of "Wonderful Days" fails to convince, then the slow dancing "Piece for Peace," at the latest, certainly will.