The NJE at Indo, Whitechapel 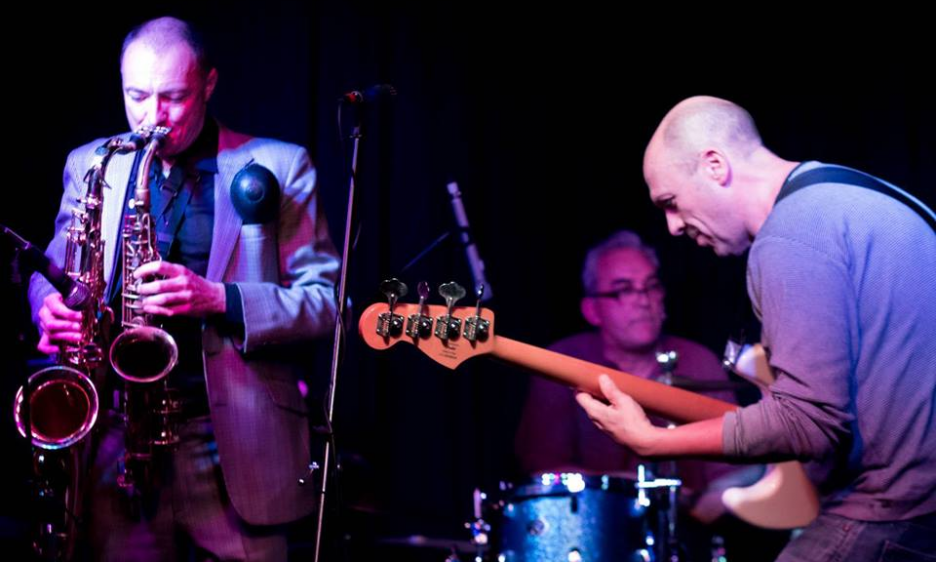 There has been a drinking establishment at 133 Whitechapel Road, east London, since the eighteenth century. A music license was first obtained in 1856 when the site was rebuilt after fire damage. Now a narrow bar, bookended by stained glass windows and a magnificent mirror, Indo hosts a monthly free gig by The NJE (Near Jazz Experience).

The trio's leader and saxophonist Terry Edwards arrived fresh from blowing on the new record by indie darlings Franz Ferdinand. He accepted a house pizza which he placed on the bar next to your humble scribe, "just to tempt you." The place was heaving before the music even got started, as drummer Simon Charterton set up his kit under a vintage clock. The bar is full of assorted curiosities and is where the band shot a video for their cover of "Voodoo Child (Slight Return)." Of course this got an airing, with Edwards using a wah-wah pedal to phase his sax into full Jimi Hendrix mode.

The set was mostly arranged and improvised around the band's debut album Afloat. Edwards shifted between alto and tenor, sometimes using the double-sax technique to honk like the noise of a beautiful traffic jam. He blew a pocket trumpet, muted tenderly, as if sighing a lament for barflies everywhere. Dapper in a grey suit, he also muffled his saxophones using either the mic or his raised thigh, like a consummate showman.

Mark Bedford on bass kept up a funky flow, nodding at The NJE's leanings towards Krautrock. Before a brief interval, Edwards wryly advised the audience to drink responsibly, whilst enjoying another large glass of red himself. The trio returned with a piece driven by tabla grooves, as a crowd of young men smoking on the street outside began a circular dance. We might have been witnessing a New Orleans 'ring shout' circa 1820.

Not that the scene inside was any less animated when Edwards handed out egg-shaped shakers. These mini-maracas were rattled by the crowd until Indo was awash with a kind of ritualised rain dance. There was also time for the band to honour recently deceased English rock eccentric Mark E Smith, with a take on his rockabilly piece "The Container Drivers."

Two nights later, The NJE delivered another smoking set at London's legendary Roundhouse, in support to Nadine Shah. Given the fan base Edwards's band is gaining among jazz fans and mainstreamers alike, you might wish to catch them at Indo, with its stuccoed Italianate frontage, before the place can no longer restrain them.