By DAN MCCLENAGHAN
April 5, 2015
Sign in to view read count 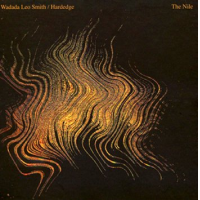 Avant-garde trumpeter Wadada Leo Smith has crafted epic sets, like the four disc Ten Freedom Summers (Cunieform Records, 2012), inspired by the Civil Rights Movement. And then there are the near-epics: 2014's The Great Lakes Suite (TUM Records, 2014), a two disc celebration of North America's great waterway. And sometimes he offers up, in contrast, fairly modest records, like Organic Resonance, a live one disc duet set with reed man Anthony Braxton. And now we have a seemingly modest, but superb duo offering: The Nile, a teaming of the trumpeter with electro- sound designer Hardedge, who crafts—with much space and subtlety—a crackling, splashing, creaking, sizzling backdrop for Smith's trumpet ruminations.

If you put Smith into a studio with just his horn and a typist with a manual typewriter, good and original music would result. With Hardedge, Smith's horn—sometimes muted, sometimes open, sometimes pure-toned, sometimes fluttering and spitting and growling—sings inside of Hardedge's cricket chirps, his electric raindrops, the soft splattering on a painter's plastic drop cloth, the flutter of a robotic bird's metallic wings, an electric wire short-circuiting behind the drywall, near subliminal neon drones, a child hammering the inside of an upturned oil drum with a hammer.

On paper it sounds like a cacophonous experience. It's not. The two artists lay out the sounds at a measured and deliberate pace, spare and beautiful, tranquil, eerie. The music's relationship to the River Nile is uncertain, but it hardly matters, and it's surely there— Wafada Leo Smith opperates on a differnt level than most of us. This is Wadada Leo Smith and his music-mate Hardedge creating a unique sonic experience.

Now where's that guy with the typewriter?

The Nile; Signs and Symbols of Humanity; Civilization of Barbarism; Harp.