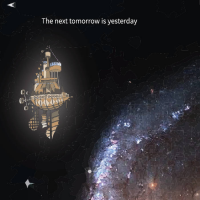 Jesse Byrom-Carter is a young bassist from Australia who has put together a CD that uses several talented players on horns, guitar and vocals to carve a distinctive path within the world of rock, jazz and soul fusions.

One of his key collaborators is guitarist Adam Rogers whose distinctive slippery sound slithers through the prog-funk of "As Is" and "The Next Tomorrow Is Yesterday," loosening up their sharp, angular rhythms. "The Next Tomorrow Is Yesterday" is also notable for its slowly swarming horn line and one of the trombonists taking a brawny solo against the pounding rock beats of Byrom-Carter and drummer Ken Ychicawa. "Hy Brasil" has a heavier feel with Byrom-Carter on electric bass anchoring twisting horn lines that set the stage for a dancing trumpet solo by Alex Quinn.

"Metamorphosis" proves that the group is also capable of straight-ahead mainstream jazz. Michael Bliss takes the lead on alto, with the other horns providing body on a jaunty, up-tempo line. Byrom-Carter and pianist Santiago Leibson also contribute here with frisky solos. The session's other pianist, Ryan Slatko, dominates "Hand Of Fate" as he plays charging, running lines under Bliss' spectacularly high piping solo and connects well with Byrom-Carter and Ychicawa on his own busy solo turn.

The music turns towards modern soul on the two vocal pieces, "Dreams Untethered" and "The Edge Of Space." Here, the band, particularly Rogers, gives a feathery underpinning to the lush voice of Alina Engibaryan. On "Dreams," Rogers' supple guitar shadows the vocalist as she sings and scats while Leibson stirs in a swaying, blue-tinged piano solo. On "Edge Of Space," Engibaryan's voice drifts huskily through a dreamy atmosphere created by the blending of guitar, piano and a lazily floating beat, with an interlude of the leader soloing against Rogers' soft chords.

Jesse Byrom-Carter has created a laid-back blend of funk, rock and jazz with substance, thanks to intricate and imaginative writing and excellent musicians, especially Adam Rogers and Ken Ychicawa. This music is pretty and soothing but it also carries deceptive depth.