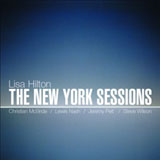 It may surprise some but pianist Lisa Hilton has ten albums to her credit. The New York Sessions is number nine and presents several problems insofar as it being a unified jazz album. She is working with some A-List players—bassist Christian McBride, drummer Lewis Nash, altoist Steve Wilson and trumpeter Jeremy Pelt. On paper, this looks like it should be an exciting album but much of it is spent on solo piano that sounds classical- and new age-driven.

The album is book-ended by two takes of Joni Mitchell's "Both Sides Now, with Hilton's solo piano showing classical flourishes on the opening version. The full quintet appears early on, and the presentation is rather routine bebop on Hilton's "Over and Over Again. On another original, "Just Want to Be with You," the horns are heard only on the melody line. There is negligible solo time afforded to Pelt or Wilson, though they are featured on the bluesy "A Bit of Soul and enliven the mid-tempoed "Where Are You Now."

Johnny Mandel's "Emily" and Thelonious Monk's "Epistrophy" are the only non-original songs remaining. "Listen to Your Heart," "Mystery," "Seduction," and "The Last Time" are solo piano tracks in Hilton's romantic but new age style.

Both Sides Now; Over and Over Again; Just Want to Be With You; A Bit of Soul; Emily; Seduction; The Last Time; Where Are You Now?; Listen to Your Heart; Epistrophy; Mystery; Both Sides Now (alternative take).