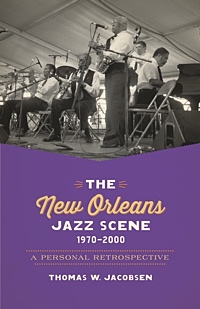 Full disclosure: I've long been an admirer of Thomas Jacobsen's writing, the catholicity of his musical tastes, and his warm personal regard for New Orleans musicians. The last was evident in his 2011 work for LSU Press, Traditional New Orleans Jazz: Conversations with the Men Who Make the Music, and his articles for Mississippi Rag and Clarinet. His new volume is a follow-up to my 2001 book, Jazz in New Orleans: The Postwar Years to 1970. Jacobsen writes, "I freely admit that Suhor's book was, to a certain extent, a model for mine. I would be delighted if the present effort begins to measure up to its ideal."

When Jacobsen spoke to me casually about his plans for the book, I frankly wondered how he could get a handle on the task. I had found considerable clarity in the contours of the developments in the city's postwar jazz scene. But the recklessly proliferating jazz activity and layered social contexts of the last thirty years of the twentieth century would be far more difficult to sort out.

Jacobsen ably ferrets out and explains the dominant patterns and underlying currents, making it look easy through organizational skill and a readable style. He sets the scene in the prologue by reviewing the 1960s, then proceeds to describe each decade in separate chapters. Some of his choices of categories for inclusion are obvious and inevitable—the traditional and modern jazz clubs (e.g., Lu and Charlie's Music Club, Tipitina's, Snug Harbor Jazz Bistro, Palm Court Jazz Cafe) and dozens of the musicians who were featured there; the continuation of the Jazz and Heritage Festival; the more jazz-oriented (and totally free) French Quarter Festival; the upsurge of brass bands; advances in jazz education; the "Marsalis decade" of the 1980s, which ushered in an era of belated recognition of New Orleans as a source of modern jazz talent.

Jacobsen's framework of major events, issues, and evolving trends rescues the book from being a mere catalogue of names and places. Readers who aren't already familiar with the city's innumerable artists and clubs—after all, only Preservation Hall, Pete Fountain, Al Hirt, Harry Connick, Jr., and the Marsalis family are household names—will find many new names embedded in interpretive contexts, such as the trend in the 1980s of major hotels featuring jazz. Jacobsen also provides perspective by highlighting underrated musicians and groups (trumpeter Connie Jones, the New Orleans Nightcrawlers brass band). Over 70 photographs lend further context and coherence to the text.

A recurring theme also lends continuity to Jacobsen's narrative—generational factors in the development of New Orleans jazz. The segments touch on many jazz styles and are fraught with irony. Jacobsen notes that the 1961 Preservation Hall revival of first generation jazz artists perpetuated the myth that "pure jazz" was the sole province of the earliest players. He cites Harlan Wood's charge that by 1976 the remaining great players were surrounded by "second-rate musicians who could have never made it up the river to Chicago and whose only musical virtue is simply their age." The Hall was thriving on "antiquity for antiquity's sake."

The ironies multiplied as the foundational artists passed away. Jacobsen notes that it was mainly enthusiastic young immigrants from foreign countries (Lars Edegran and Clive Wilson), not locals, who first understudied the surviving originators. But the Hall needed greyheads to maintain the aura of authenticity. Aging local modernists (trumpeters John Brunious, Leroy Jones) revisited the early repertoire, comfortably interweaving old and new elements into their solos. Jacobsen quotes reedman Jack Doheeny: "Professional players here, older cats in particular.... simply know a ridiculous amount of material. They have to, in order to make a living."

Another age-related quirk in the New Orleans jazz scene is the neglected "in between generation of modernists"—too young to have been among the pioneering players of the postwar years (reedmen Al Belletto, Edward Blackwell) yet older than the Marsalis siblings and their celebrated contemporaries (Nicholas Payton, Harry Connick, Jr.) who rose to fame in the 1980s. Jacobsen brings to the forefront the most representative and enduring group, Astral Project. Tenor saxophonist Tony Dagradi, pianist David Torkanowsky, guitarist Steve Masakowski, bassist James Singleton, and drummer Johnny Vidacovich founded the group in 1972. They are universally respected by musicians and jazz aficionados but they do not have recognition in the larger public.

The numerous brass and marching bands of the 1970s and beyond are a special case of carrying on, extending, and abusing an honored tradition that dates back to community and social club bands of the pre-jazz years. Jacobson cites Dr. Michael White's statement that the late 1970s were "a transition period, after which the look, sound, and feel of brass bands and parade traditions... would forever be radically different." Some groups (the Eureka Brass Band, the Onward Brass Band) would continue to capture the grit and joy of the early bands, but the "neo-brass bands" (The Dirty Dozen Brass Band, Rebirth Brass Band) would incorporate rock, R&B, be-bop, and hip-hop.

Jacobsen is aware of the unwarranted praise heaped on some of the inept young brass bands. He quotes trumpeter Irvin Mayfield: "You pick up an instrument, you get a gig, you go to Europe.... I'm not tolerating this, man." He reports veteran tenor saxophonist Kidd Jordan's complaint that the young bands were often lacking in fundamentals.

It would be easy to quibble over minor points. What, five photos of the venerable Doc Cheatham, but none of the brilliant modern trumpeter Leroy Jones? No mention of the "busker" bands that were setting up shop on French Quarter streets? These are judgment calls, of course. Jacobsen had the thornier task of deciding which musicians, night clubs, recording sessions, and events to include from the thirty-year time span. Clearly, he provides an extensive and intensive view of the 1970-2000 jazz scene. The subtitle is "A Personal Retrospective," but Jacobsen's scholarship and fairminded coverage of all jazz styles make the book an important report on a slimly researched period in the city's jazz history.