By KARL ACKERMANN
September 30, 2019
Sign in to view read count
In 1929, as the Great Depression set in, radio listeners craved nostalgia; pre-devastation comfort music for the ears. For a large swath of the U.S. that music was not jazz but roots music—gospel and blues were initially the most popular broadcasts on radio and the country-western genre gained popularity with listeners. Chicago's WLS radio began to broadcast a program called Barn Dance in 1924. The country-western formatted show quickly became so popular that it gave birth to a successor, National Barn Dance broadcast—beginning in 1925—on WSM in Nashville, a station with bandwidth greater than WLS. Within its listening area patrons would gather for square dances called over the radio. As the program evolved, some Swing and Western Swing made their way into the mix. Western Swing was, in the minds of many listeners and station managers, an off-shoot of country but musicians came from backgrounds that included regional swing styles, Dixieland, and jazz. By the 1930s big band music had become America's pop music and its presence on the airwaves was ubiquitous nationwide. By the power and popularity of their music, some black bandleaders began to breakdown the racial barriers of radio. Along with white bands of Benny Goodman, Paul Whiteman, Glenn Miller, and the Casa Loma Orchestra, the bands of Cab Calloway, Count Basie, Louis Armstrong, Fats Waller and Duke Ellington had notable success on white-owned stations. But others, such as Fletcher Henderson, whose record company didn't promote him, were less likely to be heard. Big band leaders became such recognizable fixtures on radio that many were identified by particular theme songs. Cox (Music Radio) cites Armstrong's "When It's Sleepy Time Down South," Basie's "One O'clock Jump," and Ellington's "East St. Louis Toodle-oo" and "Take the A Train" as some of the many avatars for fans.

KDKA in Pittsburg began a long-running program—the Uncle Ed Shaughency show—in the 30s and featured big band music daily, throughout the swing era. Cox suggests that some popular bandleaders of the era were not enthusiastic about broadcasting their performances. Paul Whiteman believed that radio would not elevate performers' status, and would likely reduce the number of paying customers at shows. Those possibilities did not stop hundreds of lesser-known bands from seeking radio coverage. To satisfy audiences on both coasts in the days before recorded performances, live shows were often marathons that could last over five hours with the same audience.

Early radio shaped a larger audience for African American musicians but it was far from color-blind. In the 1930s over three-quarters of all U.S. blacks lived in the South, outside urban areas, and they were with few exceptions impoverished. While radio ownership proliferated, ownership was mostly white; programming, including the music made by African Americans, was targeted to the white audience. In the mix were early jazz, minstrel style shows and other "entertainment" such as Amos 'n' Andy, a degrading black stereotype comedy so wildly popular among whites it ran from 1928 until 1960 with forty-million listeners. The setting of the show was moved from Atlanta to Chicago, to Harlem and the black characters were voiced by white actors. The original program was launched from WMAQ, the Chicago radio outlet, and at the peak of its popularity in the early 1950s, it was adapted for television but only ran for two years. The theme song for the radio and television versions was taken from the score of the infamous white supremacist movie, Birth of a Nation (1915). In 1930, RKO Pictures produced Amos 'n' Andy film with the radio stars in blackface. Ironically, the movie, which was widely panned, included a scene with Duke Ellington and his orchestra.

Radio broadcasts, by and for the black audience, began in small measure, in 1929 with The All-Negro Hour, a program that pushed away from the minstrels of white radio to focus on genuine African American music. Hosted on WSBC in Chicago, the station hired Jack Cooper, believed to be the first African American announcer in the U.S. Copper also produced the program. In 1929, three of Chicago's most populated neighborhoods were between seventy and ninety percent black. In the late 1940s and early 1950s radio lost many listeners to television, the next technological frontier for those with disposable income. Advertisers of the time recognized that African American consumers were increasingly positioned to fill the radio void. To best address this market, stations had to quickly address the lack of programming and black radio personalities. In Legendary Pioneers of Black Radio author Gilbert A. Williams explains that in 1951 new ground was broken by NBC which instituted an integration policy for its affiliates that increased on air black talent by two-hundred-percent. In 1949 WDIA in Memphis hired an all-African American announcing team and WERD (Atlanta) became the first black-owned station in the country. "Rhythm and Blues" programs drew mixed-race listening audiences to black hosts and black urban music.

WNEW-AM in New York was, for many years, considered one of the most successful radio stations in the U.S. From around 1938 through the late 1950s jazz figured prominently in the programming mix, which included talk and news. The station favored big band and especially singers in the Great American Songbook tradition. However, a popular late-night DJ named Art Ford was reportedly fired for playing "too much jazz...." WBGO (88.3 FM) first aired in 1948 and is a public radio station based in Newark, New Jersey but with its transmitter in Times Square. Billed as "Jazz 88" WBGO is not solely dedicated to jazz. The station hosts several talk/news/information programs and a blues program and one dedicated to rhythm and blues. The jazz programs tend toward traditional mainstream artists. The station's FM signal has always been spotty and some complained that their 2011 switch to a new transmitter did nothing to improve reception. Now broadcasting on the web, the problem is resolved for listeners with internet access.

The bastion of jazz radio is the university system. Temple University has an unprecedented six stations —WRTI, WRTJ, WRTL, WRTQ, WRTX, and WRTY—all dedicated to jazz. KCSM is owned by the San Mateo Community College District and serves the San Francisco Bay Area from studios at the College of San Mateo. The commercial-free station broadcasts jazz music, twenty-four-hours a day. There are many hard to catalog local stations such as WXHQ-LP (105.9 FM). The fifty-watt station serves only the Newport and Providence, Rhode Island area and plays jazz, blues, R & B, bossa nova, Afro-Cuban, lounge, soul, funk, reggae, ska, electronic, downtempo, acid-jazz, surf, world, country, folk, and rock. A public station, WXHQ has a policy of not playing music that features English language vocals. They provide radio coverage of the Newport Jazz Festival. There are approximately eighty to one-hundred jazz radio stations in the U.S. as of 2018 data. About seventy stations bill themselves as "mainstream" jazz or a combination of mainstream/smooth, or mainstream/fusion, and forty of these stations are affiliated with a college or university. The majority are member-supported, public radio stations and very few offer round-the-clock jazz programming but offer a mix that may include classical music, news, and talk. All About Jazz hosts podcasts and radio programs daily, currently offering ten programs as of late 2019. The webcasts are available on the All About Jazz home page.

The four discs below represent different time periods and styles of jazz, all captured from the original radio broadcasts. 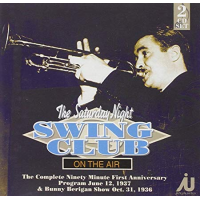 The cover implies this double-CD is a Bunny Berigan release but there are tracks from Django Reinhardt, Stephane Grappelli, Benny Goodman, Claude Thornhill, and others. There are forty-one tracks over nearly two hours and all are from—presumably—various radio broadcasts and stations. The original recordings are from the 1930s and the quality is spotty. 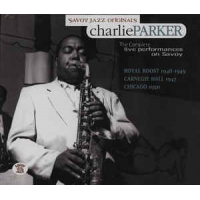 Before it closed in 1958, Harlem's Savoy Ballroom hosted prominent jazz artists and drew in celebrity fans for over three decades. This album features 1948 and 1949 Parker performances broadcast for an unspecified radio station, but a well-known disc jockey of the time, Sid Torin ("Symphony Sid"), at was then at WMCA-AM 570 and appears on the broadcast as a host. A young Miles Davis plays on the first half of the album and Kenny Dorham on trumpet for the latter tracks. Milt Jackson, Max Roach, and Al Haig are on board. Many of Parker's familiar tunes are here, including "Koko," "Groovin' High," "Chasin' the Bird" and "Anthropology" along with compositions from Thelonious Monk, Davis, Dizzy Gillespie, Tadd Dameron, and Lester Young. The remastering and packaging are impressive. 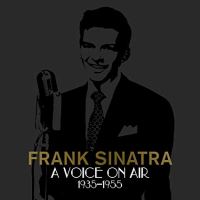 A four-disc box set covering twenty years of radio broadcasts from Frank Sinatra. The crooner focuses on swing here and is backed up by the big bands of Harry James, Tommy Dorsey, Alex Stordahl, and others. He performs thoughtful duets with the likes of Doris Day, Peggy Lee and Nat King Cole and some gimmicky nonsense with Bob Hope, Jimmy Durante, and one-time Louisiana governor Jimmie Davis; a legitimate singer, but not necessarily here. In these many tracks Sinatra covers familiar ground, including many staples of his career. Some unnecessary filler appears in radio commercial jingles and comedy pieces. For Sinatra fans, the quality of this Sony Legacy collection is excellent and the originals had not been heard since the radio programs. 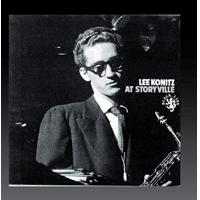 The album, recorded live in 1954 at Boston's Storyville Club for WHDH radio, features the alto saxophonist Lee Konitz at the start of his solo career. Konitz had been a sideman for his mentor Lennie Tristano before leading this quartet with pianist Ronnie Ball, Percy Heath on bass, and Alan Levitt on drums.